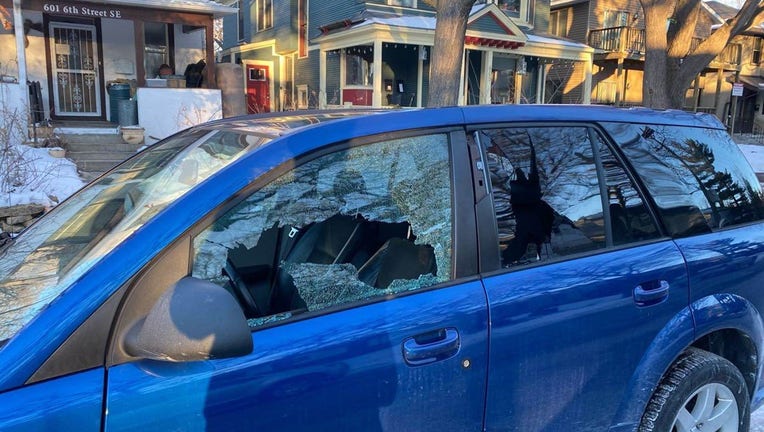 A block in the Powderhorn neighborhood was targeted by a vandal who broke car windows. (Kevin Gibbons)

MINNEAPOLIS (FOX 9) - About one mile from Minneapolis’ George Floyd Square, some homeowners have recently had a surprising expense as someone has been shattering car windows in the Powderhorn neighborhood.

"I was really shaken. The first time it happened I thought it was just random kids, then the second time I was afraid someone was after me," neighbor Meg Bradley said. "And then I found out that all sorts of people up and down 18th Ave had had similar things happen."

Minneapolis' Powderhorn neighborhood is on edge as an unknown vandal has been damaging cars and car windows recently.

Minneapolis’ Powderhorn neighborhood was hit hard at the end of January.

"It was a couple [of] nights in a row on our particular street," neighbor Maggie Keller said. "I had heard through chatting with the neighbors that a couple cars on the opposite side of our street had been hit."

Then, on the next night when Maggie Keller went to drive her car, "When I closed my driver’s door, the glass out of the back of the van shattered and I was like ‘oh, we got hit too.’ And there were many other cars that got hit at the same time."

If you were parked on Minneapolis’ 18th Ave S. between 32nd and 33rd on Jan. 25, you were in the wrong place at the wrong time.

"I didn’t get the impression that whoever did this was trying to break into cars," neighbor Jamie Schwesnedl said. "They were just breaking windows."

"The cop who showed up to my door was super forthcoming that there was a lot of cars hit in south Minneapolis over those couple of nights," Keller added.

The damage varied from car to car.

"It was broken but it hadn’t fallen out, so it was just all shattered with a little BB hole," Schwesnedl said of her window.

Despite what’s happened, Keller considers herself lucky, or even "privileged." Her insurance covered the damage and she didn’t even bother to take a picture of it.

"I know how much insurance got billed for, and I think for some people in our community, they probably had to choose if they wanted to fix the window it might be between groceries for the week, or [medications] for the month," Keller said.

The Minneapolis Police Department said it took 16 reports of property damage in the area during the overnight hours between Jan. 5 and Jan. 26. They’re working the cases but don’t have anyone in custody at this time.