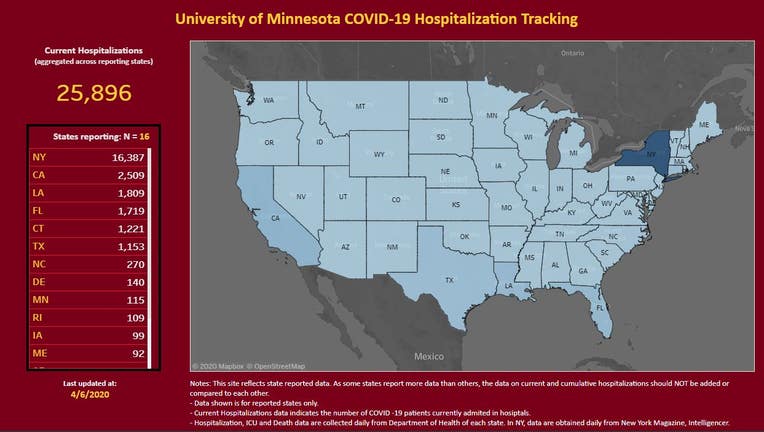 The University of Minnesota released this hospitalization tracker dashboard based on available data from 37 total states.

The Carlson School of Management devised the tool that uses Department of Health data and compares it to each states’ hospital bed and ICU capacity to visualize and compare COVID-19 hospitalizations in most of the United States.

Professors at the U of M say the tool is the first of its kind nationwide.

“Whereas each state collects its own data, we wanted to make it easy to share and analyze data across states,” said Pinar Karaca-Mandic, associate professor at the Carlson School of Management and academic director of the Medical Industry Leadership Institute. “This wasn’t possible until we launched this project, and this is the first time that a comprehensive national view of the data is available."

The data is adjusted for each state’s population to give accurate comparisons, but the raw data is also available on the dashboard.

Professors hope the tool can be used by public health officials to help them plan for the expected increase in COVID-19 cases.

“Our public health system is fragmented and each state is navigating this crisis independently,” said Archelle Georgiou, M.D., chief health officer at Starkey Hearing Technologies and an executive in residence at the Carlson School who is co-leading the project with Karaca-Mandic and Sen. “This project will help unite states with data.”

Researchers started putting together the project March 26 and released it two weeks later.