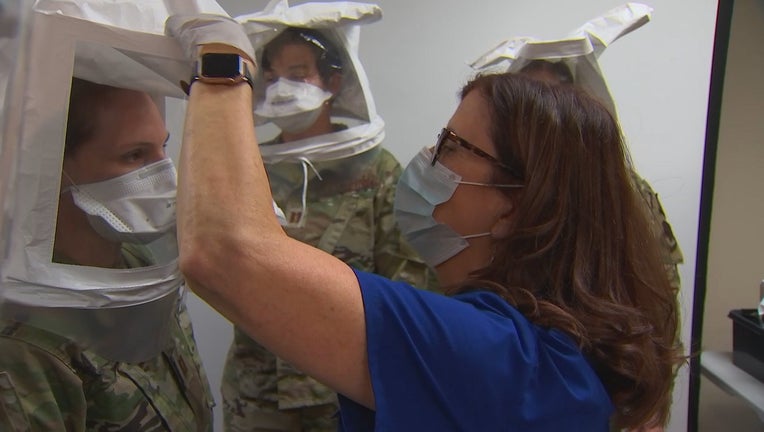 MINNEAPOLIS (FOX 9) - U.S. soldiers deployed Tuesday to two Minnesota hospitals that care for some of the sickest COVID-19 patients and are facing staff shortages.

A 23-person unit arrived at Hennepin County Medical Center and will start caring for patients on Thanksgiving. A separate unit is arriving at St. Cloud Hospital. Separately, 400 Minnesota National Guard soldiers will deploy the week of Dec. 6 to nursing homes facing the worst staffing shortages.

Minnesota National Guard is stepping in to help amid the rise in COVID-19 cases and shortage in staff.

The military help is seen as a short-term fix to weather Minnesota's current COVID-19 surge, though the deployment is open-ended because long-term answers to the staffing shortages have eluded Gov. Tim Walz and state lawmakers.

Hennepin Healthcare chief executive Jennifer DeCubellis said her hospital sought federal help on Friday because a lack of staff is causing the emergency department to back up, forcing HCMC to turn away patient transfers from rural Minnesota hospitals that often lack the expertise to care for trauma patients.

"Minnesotans need to hear us say demand for emergency and life-saving care has exceeded our capacity," DeCubellis told reporters during an event with the military, Gov. Tim Walz and Minnesota National Guard. "We've pushed ourselves as far as we can go."

The hospital has already added 40 beds beyond normal levels. COVID cases have pushed the hospital over its capacity, but incoming patients with all illnesses are the sickest that HCMC has ever experienced, she said.

'No real fear' of the work ahead

Most of the soldiers are coming from Langley Air Force Base in Virginia. Some were previously deployed to Alexandria, Louisiana to help with a COVID surge there.

"Frankly, we’re in the military. We are called to do what we have to do. We made a choice," said Lt. Col. Brandon Shealey, the officer in charge. "As such, we follow through. So there’s no real fear in that regard (of working with COVID patients)."

Health Commissioner Jan Malcolm said HCMC and St. Cloud Hospital were chosen for geographic reasons and the level of trauma they treat. Other hospitals have asked for federal help, but the state isn't counting on additional resources, she said.

Separately, Walz activated 400 National Guard soldiers on Monday to start training as nursing assistants. The plan is to send them into nursing homes to relieve staff shortages in two weeks, Malcolm said.

Maj. Gen. Shawn Manke, the head of the Minnesota National Guard, said plans are in place to expand beyond the 400 soldiers if needed.

As the state grapples with short-term relief it's unclear whether Walz and lawmakers will come together on long-term moves to address the staffing issue.

Negotiations for a special session have been deadlocked for months over a Senate Republican threat to fire Walz's health commissioner, Jan Malcolm, over the state's handling of the pandemic.

Tuesday, Senate Majority Leader Jeremy Miller said Senate Republicans would back off the threat for now in exchange for other Republican proposals being added to a special session agenda. They include the lifting of some regulations for hospitals and up to $200 million in aid for long-term care facilities.

"We are willing to put any discussions regarding commissioner confirmations on hold at this time to get a special session done and continue those conversations during the regular legislative session," Miller, R-Winona, said on WCCO Radio.

But Walz said in the late afternoon he won't call a special session until there are agreements in place on the key issues.

"Not until we have a solution," Walz said when asked. "I'm not getting in the middle of everything we're doing here."

Walz said easing regulations on hospitals would've been more beneficial before the latest surge than in the middle of it.

As the stalemate over a special session lingered in recent months, Walz and lawmakers kept adding to the agenda.

Lawmakers have long agreed on the top priority: approving $250 million in pandemic bonus pay for frontline workers. But they've never agreed on who should get paid -- or what the size of the checks should be.