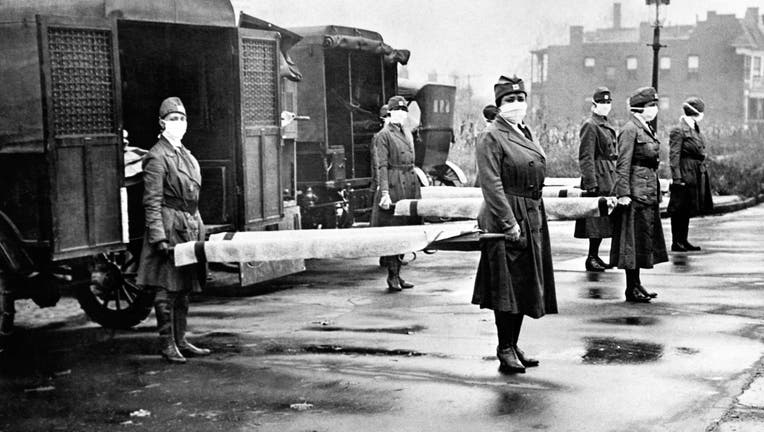 (FOX 9) - Minneapolis and St. Paul took very different approaches to the last pandemic, the so-called ‘Spanish Flu’ of 1918, and the politics and policies that played out then parallel the current coronavirus.

“I think it’s almost haunting some of the similarities with 102 years ago and today,” said Curt Brown, a former Star Tribune reporter who wrote the book, ‘Minnesota 1918:  When Flu, Fire, and War Ravaged the State.’

Twin Cities pandemic lessons from the Spanish Flu of 1918

Minneapolis and St. Paul took very different approaches to the last pandemic, the so-called ‘Spanish Flu’ of 1918, and the politics and policies that played out then parallel&nbsp;the current coronavirus.&nbsp;&nbsp;

In 1918 Minnesota was also contending with other historic events, including World War 1. In October of that year, as the pandemic death toll was climbing, there was a major fire near Cloquet and Moose Lake that killed 450.  The fire remains Minnesota’s largest natural disaster.

The first flu cases were in March of that year among troops at Fort Riley, Kansas.  But due to war time censorship, news of the global pandemic was first reported by the press in neutral Spain, thus earning the moniker, ‘The Spanish Flu.’

A soldier returning home that September, to the small farm town of Wells in Southern Minnesota, is believed to have been the state’s ‘Patient Zero.’

Historical records indicate that within 48 hours, 200 others in town were sick too.  The outbreak swept across southern Minnesota, and in just two weeks, infected more than 2,000.

At first, city leaders in Minneapolis were in denial. “Spanish influenza does not exist in Minneapolis and never has,” said Dr. H.M. Guilford, Minneapolis Health Commissioner, who admitted the flu might later reach the city.

But it was already there. Within days of Dr. Guilford’s claim, there were 1,000 sick soldiers at Ft. Snelling.  Soon there was another outbreak on the University of Minnesota campus where soldiers were training.

It was the perfect recipe to spread a deadly virus.

“You talk about soldiers at the U, and at Ft. Snelling, that was really a breeding ground for a spike of young people getting sick and dying,” said Brown.

The 1918 flu attacked those in their prime, as well as children and the old.

The dead began to pile up.

“They quickly ordered, from the state level, closed caskets no one allowed to attend funerals, they were afraid the corpses were spreading the deadly virus,” said Brown.

On midnight, Oct. 12, Minneapolis began a ban on all social gatherings, closing its schools, churches, dance halls, and theaters.

But as Minneapolis rolled up the streets, St. Paul held out for another month.

“St. Paul was trying to maintain the status quo and keep everyday life as it was and didn’t take it as seriously as their brothers and sisters across the river,” said Brown.

Civic leaders mocked Minneapolis, for overreacting. The head of the State Board of Health, Dr. H.M. Bracken, initially called the Minneapolis ban “a joke.”

No one was laughing a few weeks later. Even Dr. Bracken reversed his stand and became one of the advocates for social intervention.

Epidemiologist have gone back to do a little historical detective work, comparing the flu’s infection curve and fatality rate for 36 major cities, the results detailed a few years ago in JAMA and recently graphicly represented by National Geographic.

And Minneapolis had the lowest per capita death rate of all the cities (267 deaths per 100,000).  And while it maintained some of those mitigation efforts for 116 days, according to researchers, the city would’ve had an even lower death rate, had it not relaxed those measures a little too soon, resulting in a second round of infections.

“They jumped the gun a little bit, and all of a sudden, ‘We’re done! We’re through! The flu is over!’ And then vroom, it came back,” said Brown.

“It will be interesting when this nightmare is over today how much do they look back at those times,” said Brown.

“We did flatten the curve, 102 years before anyone heard that expression.”