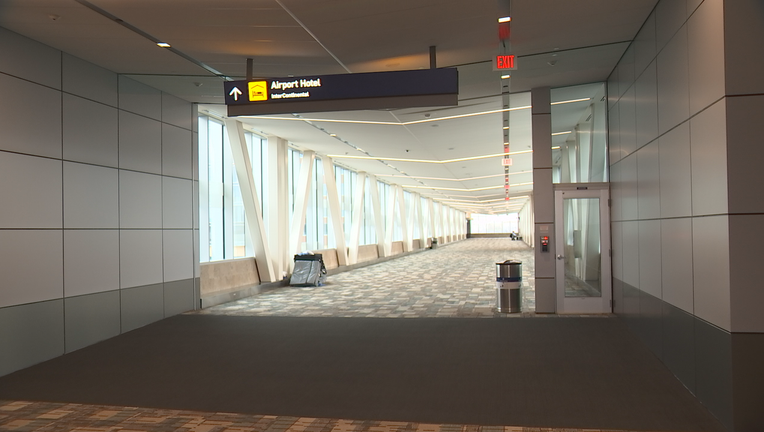 A security checkpoint outside the Intercontinental Hotel at MSP airport has been closed. It was completed last year for a price of $24 million.

MINNEAPOLIS (FOX 9) - Just when security lines at MSP Airport were starting to speed up, the TSA closed another checkpoint Monday, but it’s a security lane few passengers know about.

The checkpoint connecting the new Intercontinental Hotel to Terminal 1 was never fully staffed by the TSA and it wasn’t consistently open.

The checkpoint connects Terminal 1 to the new Intercontinental Hotel, but the TSA closed it Monday to better staff other areas.

Currenlty, all lanes on the north and south ends of Terminal 1 are open, but the Intercontinental Hotel checkpoint is silent and closed Monday.

That now dormant checkpoint and connecting skyway cost the Metropolitan Airports Commission $24 million to construct, according to a FOX 9 report from 2018.

“Today, I’m really sad to say the TSA has not held up its end of the bargain,” said Rich King, the Metropolitan Airports Commission chairman.

King and his MAC colleagues expressed outright anger at the TSA decision made in Washington, D.C.

Few passengers used the checkpoint, but the MAC and even intercontinental owner Jim Graves blame the TSA for never giving it a chance.

“Having this intermittent close and open and now close again situation is causing a lot of hardship on the hotel and it’s confusion for our guests,” said Graves.

The timing of this closure is also not good. One week from Monday, the airport is expecting a record number of Thanksgiving holiday travelers. And it’s already had a very public dispute with the TSA over the number of security checkpoint operators.

In August, both Senators Amy Klobuchar and Tina Smith demanded the TSA bring in more security agents to speed up security lines. Now, there are 30 agents staff above their authorized level, which sped up lines.

The TSA’s local security director says they expect few problems for the holidays this year.

“We expect to have every lane open at the north and south checkpoints,” said Cliff Van Leuvan, the federal security director.

That’s why the TSA decision in Washington to close the hotel checkpoint is unacceptable to the MAC chairman.

“I think there are many alternatives,” said King. “But just arbitrarily just shutting it down is certainly not the best alternative.”

When the MAC built the checkpoint and skyway, it says it had an agreement with the TSA. That’s why it now says the TSA is not living up to its end of the deal.