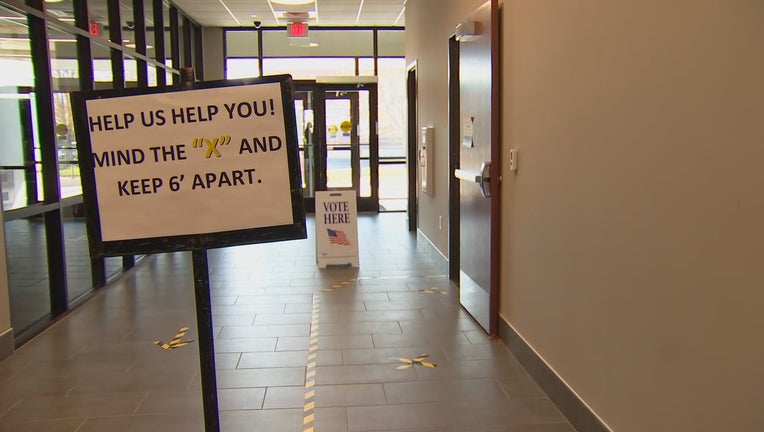 A special election for Wisconsin's 7th Congressional District was held on May 12, 2020 amid the COVID-19 pandemic. (FOX 9)

HUDSON, Wis. (FOX 9) - On Tuesday, Wisconsin voters in the 7th Congressional District voted in a special election to fill the seat that former Congressman Sean Duffy vacated in August.

The race was between Republican Tom Tiffany, a Wisconsin state senator, and Democrat Tricia Zunker, a Wausau school district board member. According to the Associated Press, preliminary results show Tiffany won the race. He had received an endorsement from President Donald Trump.

Republican Tom Tiffany won the special election for Wisconsin's 7th Congressional District. That is according to preliminary results from the Associated Press.

In a speech posted on his campaign's Facebook page, Tiffany thanked voters for their support and also commended his opponent as they both compaigned under "difficult circumstances" amid the COVID-19 pandemic. He called this "one of the most unusual campaigns" he's been through.

"I have one goal as I go out to Washington D.C. and that is to get America back up on her feet again," said Tiffany. "This is a real blow that we've taken over the last couple months."

"The Republican Party of Wisconsin is proud to congratulate Congressman-elect Tom Tiffany on his victory in Tuesday’s special election," read a statement in part from Wisconsin GOP Chairman Andrew Hitt. "I am confident that Tiffany will continue to fight for the people of the Northwoods in Washington as he did in Madison. We need more of Tom Tiffany’s northwoods common sense in Washington to help Wisconsin families get through the COVID-19 pandemic and back to prosperity, stop the spread of socialism and lower our healthcare costs while increasing access."

This was the second election held in Wisconsin amid the coronavirus pandemic. The first was on
April 7 for the Wisconsin primary where voters picked former Vice President Joe Biden as the Democratic candidate.

Poll workers in Hudson and Osceloa say they had to make very few changes between the April election and May special election.

“Really, we basically just finetuned some things as far as having the supplies readily available for our elections inspectors to use,” Osceola Village Clerk Fran Duncanson said.

Poll workers said the biggest difference in Tuesday's election was a lower in-person turnout compared to the election held in April. Duncanson says she typically will issue between 30 and 50 absentee ballots for an election. For Tuesday’s special election she issued around 300.

“I think they’re choosing that just trying to stay in compliance with the stay-at-home order. It’s safe and secure for them in the process,” Duncanson said.

In Hudson, poll workers say they too saw an decreased number of in-person voters, but an uptick in absentee voting.

“To the best of my knowledge our absentee ballots went up about 40 to 50 percent than what they were in the April election,” Hudson Elections Inspector Mike Younggren said.

Approximately 250 members of the Wisconsin National Guard assisted local poll workers in Tuesday’s election. According to the Wisconsin Department of Military Affairs, this is “possibly the first time in the nation’s history” where the Guard has served a role in assisting with elections.