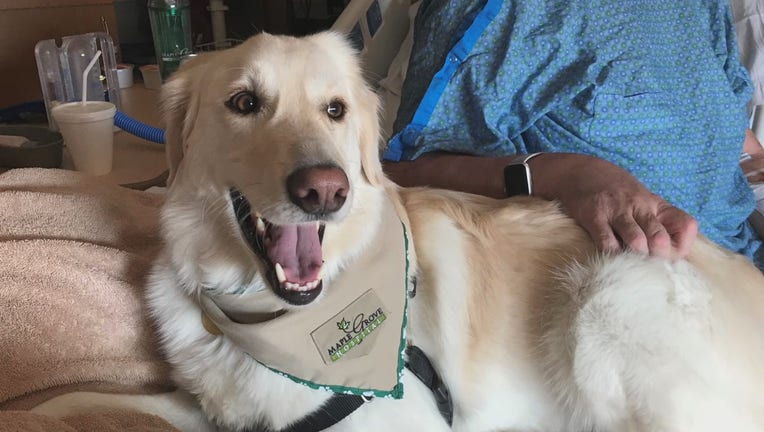 COON RAPIDS, Minn. (FOX 9) - A Twin Cities therapy dog rescued from a forest in Turkey has been getting some well-deserved attention including a nomination for a nationwide award for his work during the pandemic and a book that documented his journey to the United States.

"Being able to really spread smiles and change lives has really been remarkable," said Christie Lindemann, who owns Sully.

The unique journey of a therapy dog in Minnesota inspired a children's book.

"He was found laying on the side of the road, he had a chip bag in his mouth. Just he was licking the inside of the chip bag and he was watching the world go by," said Lindemann.

Brought to the U.S. through Retrieve a Golden of the Midwest (RAGOM), he became a therapy dog. Through the pandemic, he has paraded past countless nursing home windows to help so many people make it through their isolation.

"This means so much to me and you see the loneliness of people and many times, many of us who go on these visits, we cry on the way home because it affects us so much," said Lindemann. "And we’re very grateful to be able to do something like that."

This spring, Sully was one of 48 therapy dogs in the nation to be nominated for the American Humane Hero Dog Award. About the same time, Christie published a children’s book recounting Sully’s remarkable rescue story. She said she was inspired to do so during a virtual visit with elementary school kids.

"This little first grade girl, she said, ‘Well I think you need to write him a book.’ And it was kind of the kick that I needed to say, ‘You know what, it’s time,’" said Lindemann.

She sat down and wrote it in an hour, took a couple more months to edit and illustrate it herself. Now, all proceeds go to the rescue group RAGOM.

"He has such a remarkable story and it gave me a platform to let people know what a therapy dog does," said Lindemann.
A few weeks, ago, they learned Sully didn’t make the cut to be a finalist for the Hero Dog Award, but she is proud of the nomination and what Sully has done so far.

"When you have love and hope in your life, things are going to be ok," she said.