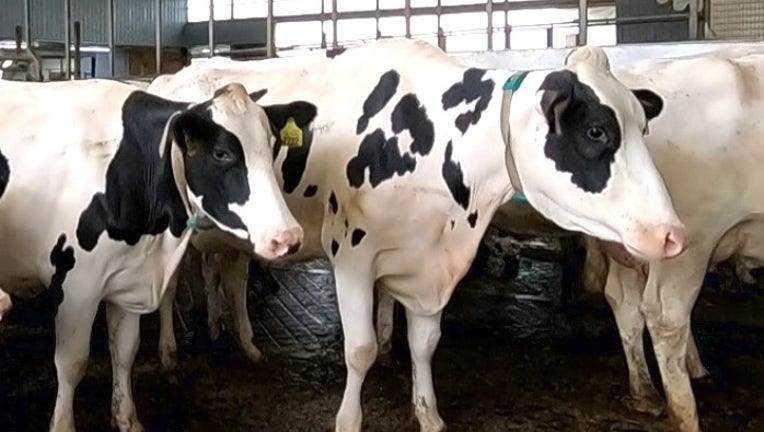 (FOX 9) - Last week, the U.S. Agriculture Secretary said he didn’t know if the family dairy farm can survive as the industry moves towards factory farms.

“In America, the big get bigger and the small go out,” Sonny Perdue told a crowd in Madison, Wisconsin.

Last week, the U.S. Agriculture Secretary said he didn’t know if the family dairy farm can survive as the industry moves towards factory farms.

In Minnesota, glimpses of that future already dot the horizon.

Just outside of Pennock, a robotic, mechanized and computerized barn is fully functional. Brothers Chad and Carl Carlson run the sprawling farm, along with their wives Kindra and Kellie.

“We are smart enough to know we need to surround ourselves with smart people. That’s one thing we did figure out,” Chad said.

Their grandfather, Carl, started milking cows in 1891. The Carlson compound has grown exponentially in the 21st century, from 200 cows to nearly 2000.

“We need some of these bigger operations so that we still got food. Reality is there aren’t going to be 30 cow-dairies anymore, milking cows like we grew up younger, that’s not reality,” Chad told Fox 9.

“The lifestyle changed, like Dad never missed a milking for 17 years, morning and night. Seventeen years straight and never left.  Who wants to do that?  Nobody does,” added Carl.

The Carlson milking parlor is automated with a rotating carousel, common in large-scale operations these days.

However, a robot actually does the milking. A 3D camera maps the udder of each cow, finding the teats, and latches on. Each cow is monitored for precisely how much milk it is producing. If one is not giving close to 100%, they bring up her data.

A collar on each animal is a sort of bovine Fitbit that monitors their activity, sleep and eating habits. One operator can milk up to 400 cows an hour.

The Carlson farm is one of five fully robotic dairies in the U.S. While they don’t like to talk about how much it costs, similar systems run between $4 and $5 million.

“The plan is cut down on labor, and get some consistency with cows,” Carl said. “They think they’re out at the amusement park and think they are on a ride and go around on a ferris wheel. They love coming on here and we’ll get cows and they don’t even want to leave and they want to stay on and go again."

The cows may have numbers instead of names, but the Carlson’s said they’re not treated that way.

“I don’t think it’s a size thing, big or small. You got to take care of the cows and if you’re not taking care of them they’re not going to produce for you. You are not going to be very economical,” Carl said.

The bigger the farm, the lower the cost per cow and the wider the profit margin.

The Louriston Dairy, just 15 miles away, has nearly 10,000 milking cows in a factory farm. Owned by Riverview, the company has a half-dozen of the mega farms and is permitted to have more than 100,000 dairy cows in Minnesota. The company, which is also family owned, declined Fox 9’s repeated requests for an interview.

Kindra Carlson manages the books on the Carlson farm.

“Every drop of milk of counts when you are milking 1600 cows three times a day; it all adds up,” she said.

There are quarterly meetings the Carlson’s have with their lenders, accountants, and consultants. There are benchmarks and goals. What they don’t have are secrets, everything’s on the table.

“You have to have that open and honest, open communication. We have to be able to communicate. Is it always peaches, and everthing’s great? No. There is conflict, but then we are able to talk through it and then come up with solutions together,” Kellie said.

In other words, they treat it like what it is, a business.

“We just can’t hope and pray that if we work really hard that things are going to come together, it isn’t that way anymore.  So we’ve learned to structure ourselves and create it as a business and manage it as a business,” Chad said.