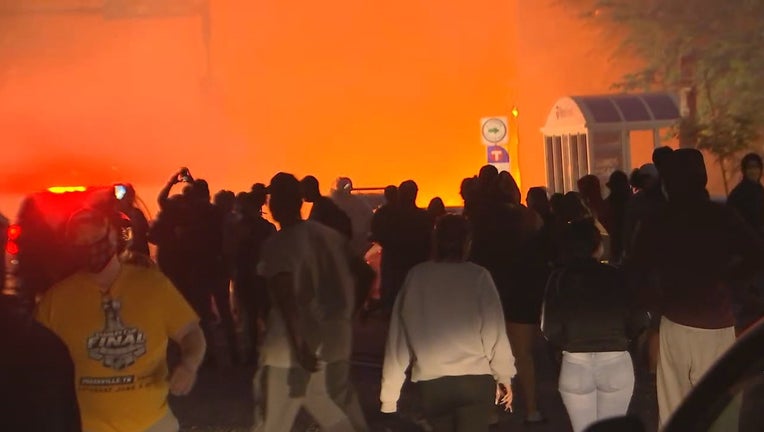 MINNEAPOLIS (FOX 9) - This timeline of events leading up to the fall of the Third Police Precinct is the product of detailed discussion with key decision makers, on background conversations with officers present at the Third Precinct, and audio of Minneapolis Police radio transmissions.

Wednesday Afternoon:  Governor’s Office and Public Safety Commissioner John Harrington anticipate peak of activity to occur on Saturday, with 75,000 demonstrating.  The initial plan is to alert the Minnesota National Guard on Thursday, assemble Friday, and mobilize soldiers by Saturday.

Wednesday night:  Reports of arsons and looting on E. Lake Street in the vicinity of the Third Police Precinct.  Minneapolis Police anticipate the Third Precinct will become a flashpoint of activity and demonstrations.

10:30 a.m.: A skeleton crew of 15 to 20 officers will be operating the Third Precinct.  Other officers are instructed to empty their desks and lockers of weapons, body cameras, and intelligence briefs.

10:55 a.m.:  Mayor Jacob Frey sends Governor Walz a formal request, in writing, to call up the National Guard to protect Minneapolis.  The City of St. Paul will make a similar request that afternoon.

Noon:  Hundreds of protestors have gathered at the Third Police Precinct.  The crowd is generally peaceful and will grow to more than two thousand throughout the day.

4:07 p.m.: Protestors begin cutting the fence around the Third Precinct with bolt cutters. Protestors are throwing rocks, eggs, and concrete at police on the front line.

4:47 p.m.: A SWAT team is mobilized on the roof and a strike team is guarding the perimeter around the footprint of the precinct.

5:18 p.m.: Two people are stabbed in the Target parking lot across from the Third Precinct.

5:24 p.m.: Police rescue the stabbing victims under a hail of debris from demonstrators.  They are in danger of being barricaded inside the parking lot.

5:42 p.m.: Officers seek, and are granted, permission to use tear gas on demonstrators. The wind sends the tear gas in the direction of officers. Protestors begin arriving from demonstrations in St. Paul.

8:43 p.m.: Police are concerned about several potential flash points downtown.  A large crowd, estimated at 1,500 is at Washington & 3rd Aves., a smaller group is on the Nicollet Mall at 4th Street, and another large group is at Hennepin Ave. & 5th St., moving towards the First Police Precinct.

9:00 p.m.: The crowd around the Third Precinct has grown to at least two thousand.  A pawn shop, liquor store, and auto parts store near the precinct are fully engulfed.  There is looting of nearby stores.  No officers are present in the street around Lake and Hiawatha except for a small cluster of 10 officers who are guarding firefighters at the pawn shop.

9:15 p.m.: Protestors are launching mortars and rocks at the Third Precinct from a distance of 175 yards.  The SWAT team wants to escalate use of force to “scat” rounds, small explosive devices that release tear gas.  The request is denied.  Commander on radio says:  “We have a plan.”  No plan is ever communicated, according to several officers present at the precinct.

9:26 p.m.: Several hundred State Troopers are in riot gear on Hennepin Avenue asking where they should be deployed.

9:27 p.m.: Authorization is given to use flash bang grenades, but officers don’t have any left.

9:36 p.m.: The evacuation of the Third Precinct begins.

9:53 p.m.: Rioters breach the north side perimeter of the Third Precinct. Nearly simultaneously, protestors are inside the front lobby.

9:54 p.m.: “You have to evacuate, right now,” says a member of the SWAT team.  Supervisors are still clearing the building and making sure no one is left behind. The reply comes, “We need to go, and we need to go now.  We are going to loose that opportunity in about 20 seconds.”

9:55 p.m.: There is brief confusion as officers are instructed to get in their squads to evacuate, and then told to exit squads to help evacuate.

9:57 p.m.: Officers discover the gate to the back parking lot, the only available escape route, has been padlocked.

9:58 p.m.: A squad car crashes through the back gate.  SWAT and Strike teams create a buffer for more than a dozen officers who are escaping on foot.  They head to rendezvous at Hiawatha & 32nd where buses will be arriving to take the officers to a safe location.

10:10 p.m.: Multiple roll calls are taken and every police officer is accounted for.  Ten police officers are still protecting firefighters battling the blaze at the nearby pawn shop.

11:00 p.m.: Approximately 400 members of the Minnesota National Guard have assembled at their headquarters in Arden Hills.  Hundreds conducted missions that day including guarding the State Capitol, and escorting firefighters in Minneapolis and St. Paul.  The Minnesota National Guard was not deployed to the Third Precinct until early Friday morning to take back the Third Precinct.

1:42 a.m.:  The State of Minnesota takes over operational control of law enforcement in Minneapolis.  Early that morning the Minnesota National Guard and State Patrol begin trying to reclaim the Third Precinct.