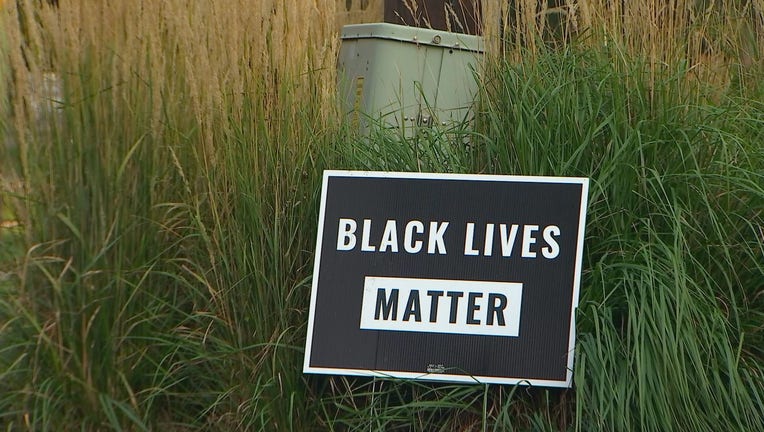 A St. Louis Park family says their Black Lives Matter sign was stolen from their yard by teenagers dressed as gorillas.

ST. LOUIS PARK, Minn. (FOX 9) - A St. Louis Park family is speaking out after a group of teens, some in gorilla costumes, stole their Black Lives Matter sign and walked up to their front door appearing to act like monkeys.

Bridget and Sam Ginnis say they are disturbed by the incident, which occurred Sunday night while the family was home.

A St. Louis Park family is speaking out after a group of teens, some in gorilla costumes, stole their Black Lives Matter sign and walked up to their front door acting like monkeys.

“I could see three teenage kids in full ape costumes,” Bridget Ginnis said. “One was holding up a BLM sign. They were all making ape noises and they were mimicking ape movements and pounding on the fronts steps.”

As parents of young children, the Ginnis Family is trying to facilitate conversations about race, which is part of the reason why they put a Black Lives Matter sign in the front yard of their St. Louis Park home.

“We put the sign out because we wanted to start a conversation,” she said. “We’re trying to educate ourselves as white parents trying to raise great, responsible, friendly white kids.”

They never imagined it would lead to the incident that occurred Sunday night.

“Worst case scenario, it was a blatantly racist act,” said Sam Ginnis. “Best case scenario, they are so sheltered from the world they don’t understand. And I think there’s a problem with both scenarios.”

The entire thing was captured on surveillance footage. It shows five people approaching the home, three of whom were wearing gorilla costumes.

The neighborhood where they live near Browndale Park is dotted with Black Lives Matter signs and theirs was the only one reported stolen Sunday night.

“I know some people think its hijinks’ or kids being kids but we’re speaking up today because silence is compliance,” said Bridget. “The conversation has to continue.”

St. Louis Park Police say they are investigating the incident.