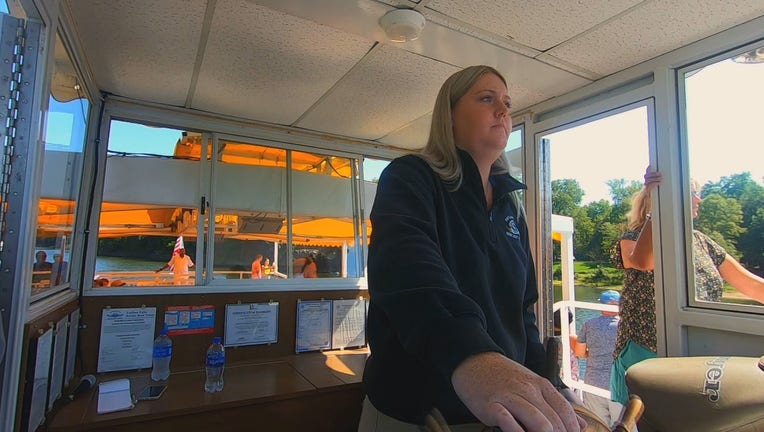 Captain Sophie on the St. Croix

TAYLORS FALLS, Minn. (FOX 9) - If you've ever been to Taylors Falls to take in the beauty of the St. Croix River, there's a chance you might have hopped aboard the Taylors Falls Scenic Boat Tour. It’s the paddlewheel boat still running up and down the river - something it's done since the early 1900s.

Throughout that time, the boat has seen a lot of captains, but in the last four years, it hasn't had one like they do right now.

The Taylors Falls Scenic Boat Tour on the St. Croix River is celebrating its first female captain in 44 years.

For six years, Captain Sophie has been watching the subtle changes of Taylors Falls from everywhere on the boat except from behind the wheel.

"I grew up here so it’s just always something I want to come home to, I just love the scenery here," Sophie said.

So, Sophie set out to chart a new course, and she embarked on a mission to captain the boat.

"I decided I wanted to take that next step, and that was something that I wanted to do and show everybody I could do it

After 365 days of training, it was official this summer. Sophie is the first female captain aboard the Taylors Falls Scenic Boat tours in 44 years.

"There’s been some grandmothers that come up with their grandchildren and they’re like, ‘oh we’ve never had a woman captain. We love to see it.’ It’s just something that makes me feel good about driving the boat and seeing people from all over the world come down here," Sophie said.

Cheering Sophie all the way is company co-owner Amy Frischmon. It had been a long time since a woman was in charge of the boat, and there had only been four in the history of the company that was launched in 1906.

Ironically, the first two boat pilots were Amy Frischmon’s grandmother and great-grandmother. Although, becoming a captain back then was a bit simpler.

"To become a boat pilot way back when, you had to go to the city office, pay $1 and you had to have two people vouch that you were of sound moral character and then you were given your boat license," Amy explained.

So, grandma had her license, but she also had better things to do on the boat than actually drive it.

"Everyone remembers grandma Ann being down on the boat and she sat up on the bow and she knits as the others piloted the boat because you needed to have that licensed pilot on the boat."

Today, the beauty of Taylors Falls keeps people coming back - and why Sophie drives three hours to Taylors Falls from college every weekend.

Sophie will be taking the boat out every weekend through the end of the season.