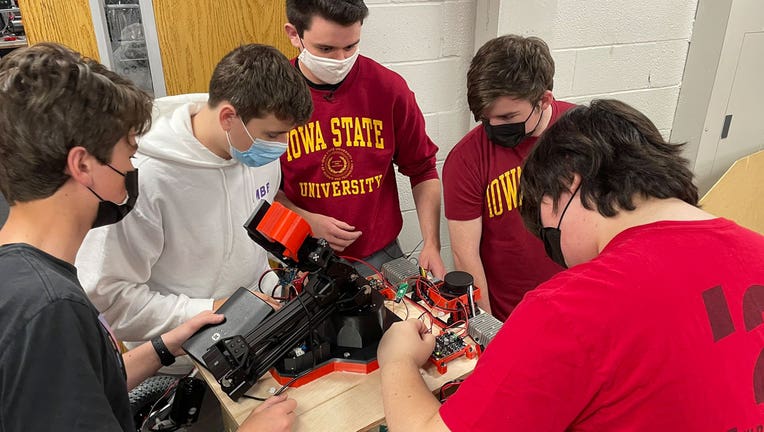 (FOX 9) - Inside the engineering lab at Benilde-St. Margaret’s High School, there’s a lot of failing and a lot of success for a group of students building a competition robot since last March.

They call the robot Rocker-Robie and it’s competing in the virtual Robo Cup later this month, where it will have to climb a hill and even pickup objects in a simulated disaster rescue.

Inside the engineering lab at Benilde-St. Margaret’s High School, there’s a lot of failing and a lot of success for a group of students building a competition robot since last March.

It’s not just robots, either. Students in the lab are inventing many different products and designs, with much of the work done from home.

Two other students are working on a mechanical wheelchair arm to allow a person to press elevator buttons thanks to a $10,000 grant from MIT.

Ryan Kraemer is generating power. He built a wind turbine that is going to go on top of the school and generate electricity for the football stadium’s press box.

"And when you trust students to do that, to take something that matters to them and give them some runway to do it, then exceptional things happen," she said.

While Rocker-Robie is not yet perfect, the engineers say it’s getting there one failure at a time.

Dougherty says the lessons of collaborating at a distance from their homes will make the students better engineers someday.

The Robo Cup is June 22. There are typically hundreds of teams from across the world that compete.