A home in Taylor’s Falls, Wisconsin, that’s on the National Register of Historic Places was damaged during storms on Monday.

(FOX 9) - Two rounds of storms that moved through Minnesota on Monday left behind hail and some damage around the Twin Cities metro.

A round of storms Monday morning left behind plenty of damage in Chisago County, including a historic home in Taylors Falls.

"We’re in shock, it’s kind of been a rubbernecker or slow down since midday," said Dan Brown.

Dan Brown and his wife Susan have lived here on River Street since the mid-nineties, but they’ll never forget the storm that came to their front door on Monday. They live in the John Daubney House, an Italianate home on the National Register of Historic Places. But, Monday's storms erased a piece of that history. 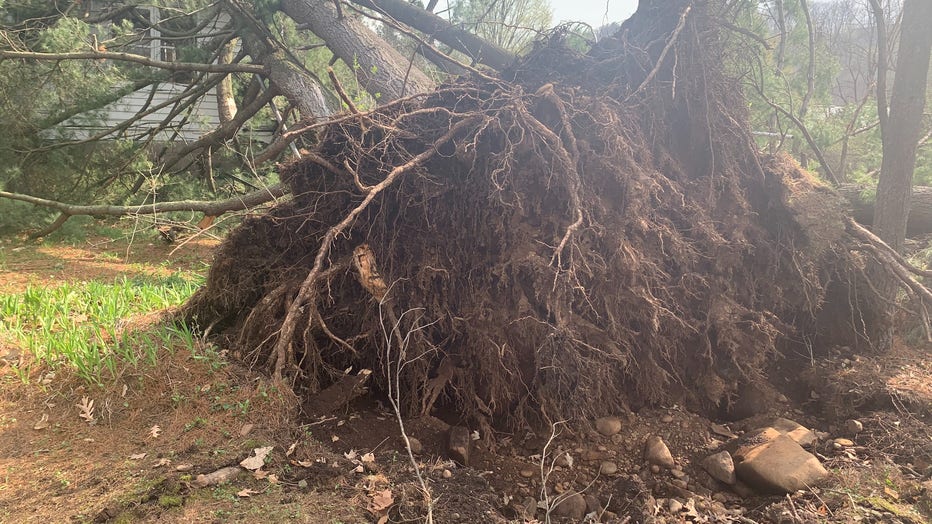 A large tree toppled near the home in Taylors Falls. (FOX 9)

Trees that once towered above the home are now pointing in each and every direction, at least 26 tossed aside on the property. The storm fell about eight or nine trees against the home, nearly slicing the back porch off the home.

"It just peeled it away from the main structure, and you can see daylight when you're inside our back porch," said Brown. "And the floor is slanted, and the windows are broken." 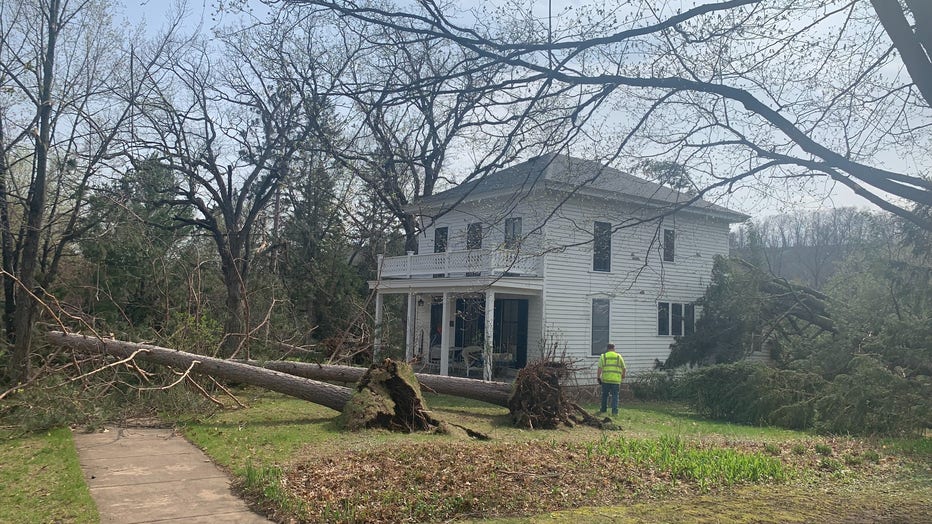 Now, Brown is struggling to wrap his head around all the work that needs to be done and how much that might cost.

"We just trust that through our insurance, we’ll get the structure looking right again," said Brown.

On the other side of the river from Taylors Falls, Debbie Petzel shared photos of the damage to a farm just north of St. Croix Falls from the Monday morning storms.

In the photos, a barn was flattened, and a grain bin was knocked off its foundation. 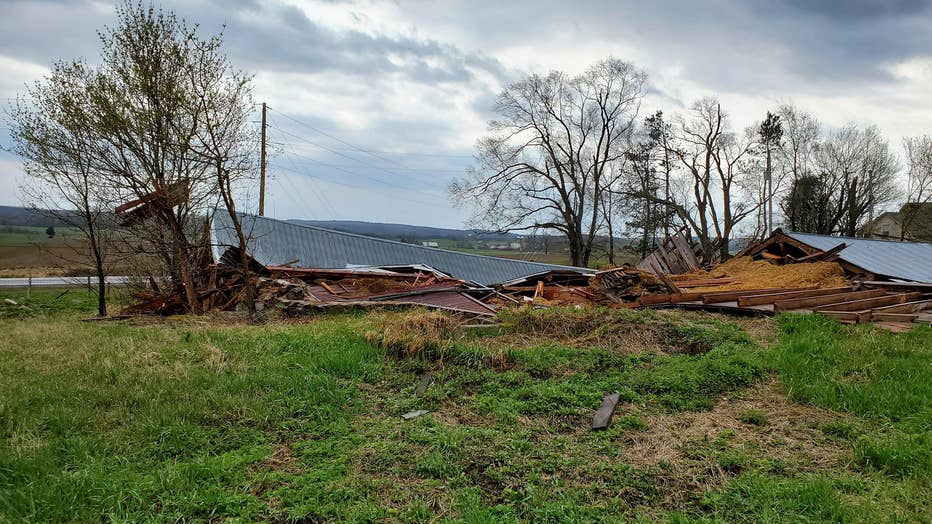 Severe storms in Minnesota Monday morning brought golf ball to softball-sized hail to western and central Minnesota, including in Montevideo, Canby, and Zimmerman. 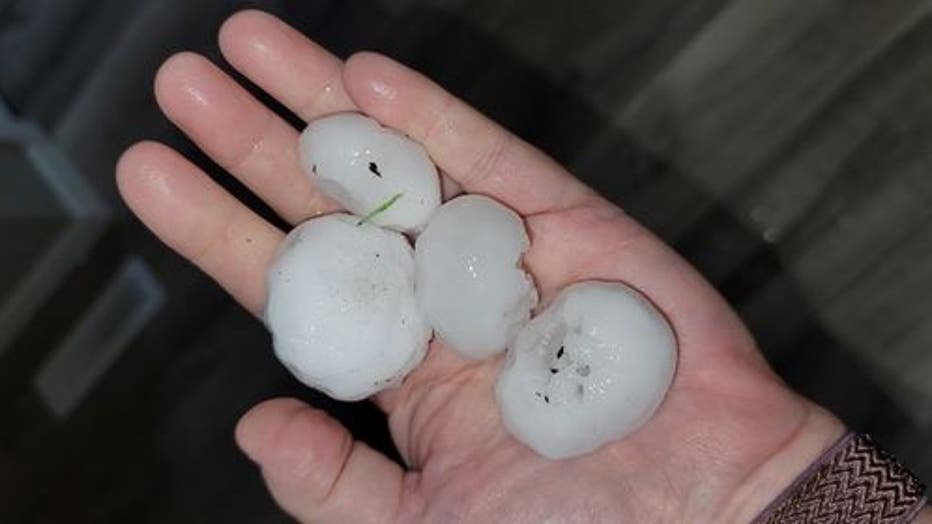 The Isanti County Sheriff's Office posted on Facebook that trees and powerlines were down around the county. "We have one house stuck by lightning and one house with a tree on it.  Emergency crews are responding to multiple locations throughout the county.  Please use caution when driving," the post said.

This video taken at 9:30 am Monday shows a downpour of hail in Zimmerman, Minn. (Video courtesy of Kevin Norris)

Minnesota was hit with a second round of storms Monday evening, which brought tornado and thunderstorm warnings to the greater Twin Cities metro and western Wisconsin. 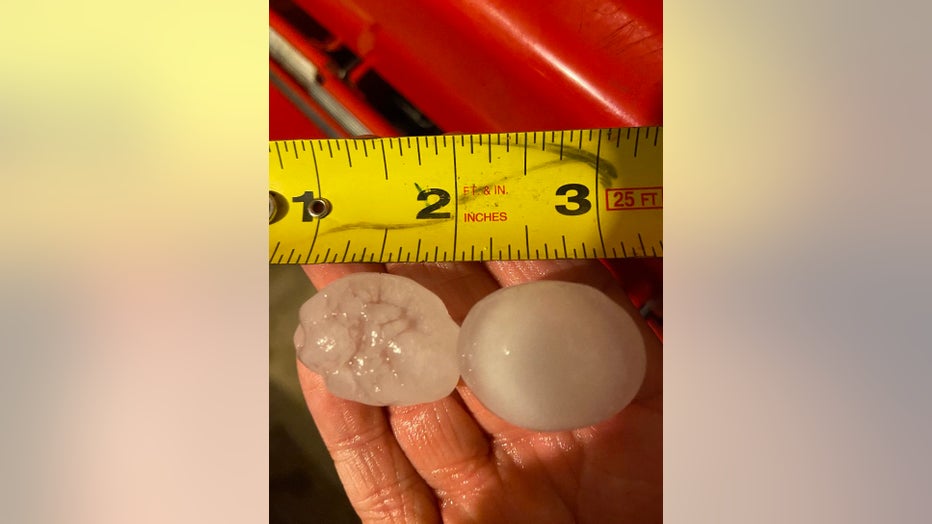 Despite the warnings and a tornado watch, as of 7 p.m., FOX 9 hasn't received any reports of significant damage from the evening round of storms.