Keeping up with pot holes in the Twin Cities metro is difficult enough. But this winter isn't making it any easier.

ST. PAUL, Minn. (FOX 9) - If the potholes seem especially bad to you this winter, you’re not alone.

"We're seeing potholes a little bit bigger and a little bit more this time of the year than we normally would," said Lisa Hiebert, the public information officer, and marketing manager for St. Paul Public Works.

There’s a stretch of Cretin Avenue near University of St. Thomas with multiple potholes in a row. Matthew Brunner’s car didn’t stand a chance against them.

"Of course with the asphalt and these potholes, you just didn't even see it coming," Brunner said.

The drive made it even worse considering it was late at night and difficult to see. He was able to limp his car to his home a few blocks away to take a look.

"I was probably saying a couple of words I shouldn't have been because I had just gotten my vehicle back from service two days earlier. So I was just like, ‘Oh no. I gotta go through this again,’" Brunner said. 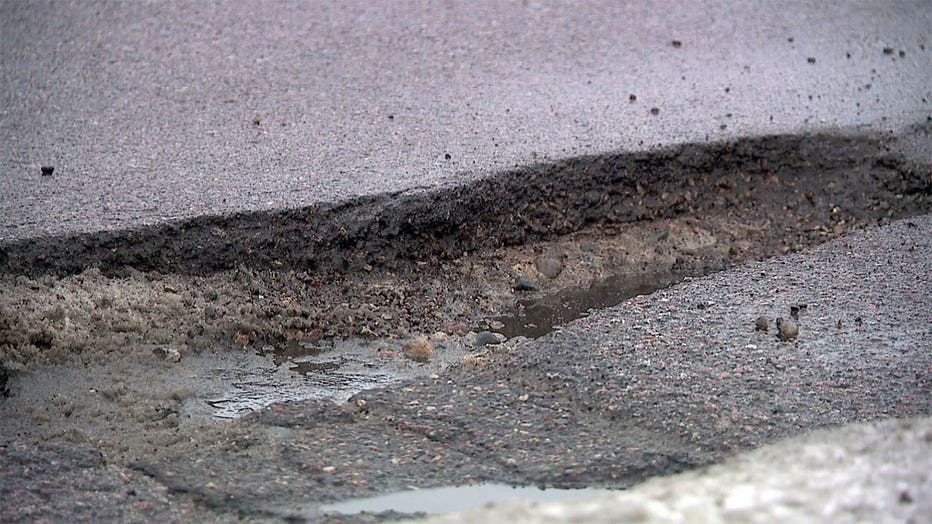 This tire-swallowing pothole is just one of the troubles that drivers face on St. Paul roads. (FOX 9)

Hiebert said in the winter, crews tend to use a cold mix to patch potholes. It doesn't have an adhesive component, so it doesn't bond as well. Crews go through an endless cycle of having to re-patch the same spots.

The pothole problem is not unique to St. Paul, but this winter has been particularly tough on the roads.

Potholes are patched by the same Public Works crews that plow streets. They focus on the main streets first.

"We're trying to get the potholes patched as soon as possible so it doesn't do damage to cars. If people do have damage to cars, they're certainly welcome to file a claim with the city," Hiebert said.

In Brunner’s case, he plans on doing just that because the repairs could be costly.

"I popped the hood, took a look and, sure enough, the shock literally blew through the top plate of the strut assembly," he said.

In the future, he said he won't hesitate to report potholes, hoping other drivers will stand a chance.

What to do when you hit a pothole

If a driver hits a pothole in the Metro, and it damages their car, first, they have to figure out who's in charge of the road: the state, county or city. They could be liable for the damage and the driver could see some reimbursement.