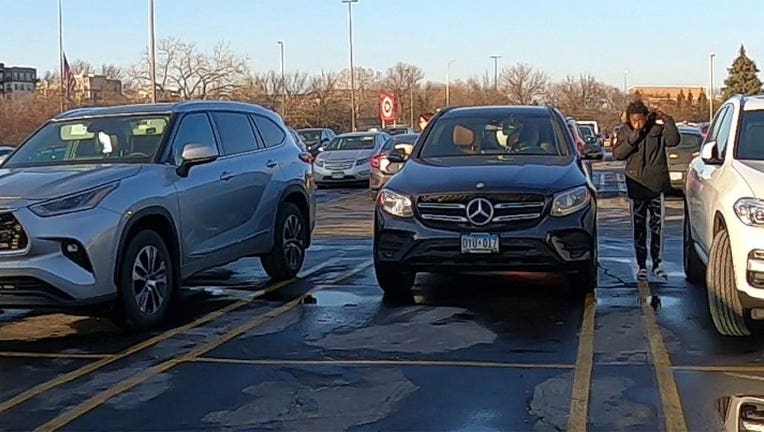 ST. LOUIS PARK, Minn. (FOX 9) - The St. Louis Park Police Department are offering a $5,000 reward for anyone with information that could lead to an arrest and conviction for a string of recent crimes, two of which happened in the same upscale grocery store parking lot.

On Monday around 5:30 p.m., Sharon McWhite was leaving the Lunds & Byerlys grocery store in St. Louis Park off Highway 100 when she was attacked and had her purse stolen by a group of three men. They later used a stolen debit card at a Target store in Richfield.

The St. Louis Park Police Department are offering a $5,000 reward for anyone with information that could lead to an arrest and conviction for a string of recent crimes, two of which happened in the same upscale grocery store parking lot.

Then on Thursday afternoon, a group of three suspects violently assaulted and attempted to carjack a man. Investigators believe this is the same group responsible for Monday's robbery. Both victims in Monday and Thursday's crimes were driving Mercedes and a light-colored SUV was used as a getaway car in both incidents.

A FOX 9 crew was there reporting on Monday's crime when a violent assault and attempted carjacking played out on Thursday afternoon.

Around 3 p.m., photojournalist Vanshay Murdock was driving through the store's parking lot off Highway 100 in St. Louis Park, shooting video with his GoPro camera.

A FOX 9 news crew at a Lunds & Byerlys store in St. Louis Park to cover a previous robbery helped intervene in an attempted carjacking in the store parking lot on Thursday. The attackers carrying some type of weapon, attacked a driver in a black Mercedes. Our crew yelled and honked a horn to get the crew to run away.

He came upon two men he thought were teenagers, trying to force a man out of his car, hitting him on the side of the head repeatedly with what appeared to be a gun or an electric drill. A third man was sitting in a white SUV, acting as a getaway driver.

After hearing the honks and yells, the group gave up and sped off. The victim was left bloody and bruised. He was treated at the scene by paramedics.

McWhite says more than just money was stolen in the robbery. The criminals took her insurance cards, cards with her home address and identity.

"Criminals are continuing to do this because there are no consequences. It's that definition of insanity. If you continue to do the same thing, nothing changes, you are crazy. We've got a lot of crazy people. Minneapolis and all the suburbs, we aren't safe anymore," said McWhite.

McWhite is grateful that she wasn't physically hurt, but echos a sentiment we have heard from residents all across the Twin Cities: something needs to change.

"People have to be prosecuted and they have to be held accountable because a lot of people are getting hurt," said McWhite, who is a grandmother of 7.

The safety of our staff and customers is always our top priority. There were recently two crimes committed in the parking lot at our Lunds & Byerlys in St. Louis Park. We have provided surveillance video of both incidents to the St. Louis Park Police Department. We have also immediately increased our security presence at this store to help ensure the safest working and shopping experience possible.