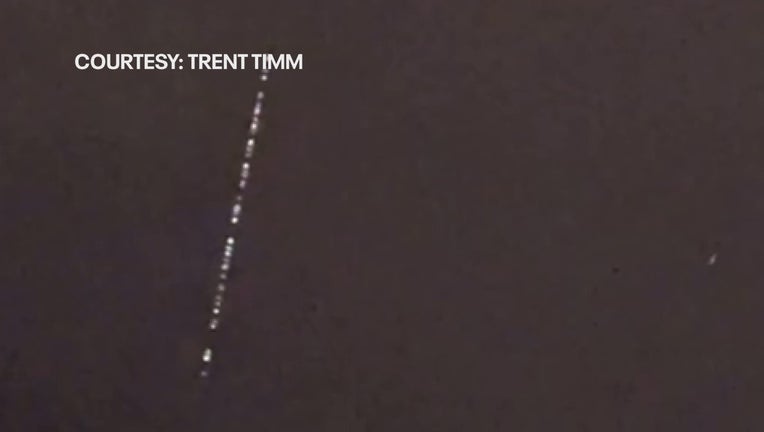 A SpaceX Starlink satellite moves across the sky.  (Trent Timm)

CENTERVILLE, Minn. (FOX 9) - Looking up into the night sky is definitely not the same as it used to be as more satellites light up the sky. While there are definite perks to missions, like SpaceX's Starlink, astronomy experts worry that it’s too much all at once.

Looking up into the night sky is definitely not the same as it used to be as more satellites light up the sky. While there are definite perks to missions, like SpaceX's Starlink, astronomy experts worry that it’s too much all at once.

A campfire earlier this week turned into some major entertainment near Centerville Lake.

"That was like 10 out of 10 premium entertainment. I mean what was that?" said Timm.

What Timm and his buddies saw were the satellites from Elon Musk’s Space X launch. The Falcon 9 rocket took off from Florida on May 4, adding 60 additional Starlink internet satellites into space. More than 1,000 are already in the sky, bringing internet to remote and rural areas.

"It’s been a big issue for several years and over the past year it’s really become critical," said Brenda Nyberg of the economic development department for Carlton County.

Right now, the project is in the beta testing phase, which includes parts of Minnesota. Carlton County has been one of those sites. While the cost is steep - about $500 dollars for the equipment and about $100 a month for service - it’s changed lives for those who have signed up and never had decent or any connection before.

"It can’t come fast enough," said Nyberg. "We don’t need it a year from now. We need it yesterday."

Musk hopes to eventually put tens of thousands of satellites into orbit in the coming decades to expand service.

"What astronomers are more concerned about is the light produced by the satellites and that has been talked about since the very first launch," said Jessica Rogers, the director of the Marshall W. Alworth Planetarium at the University of Minnesota Duluth.

Light reflecting off all the satellites is causing issues for astronomers trying to monitor what’s happening above from ground level.

"We’re taking images of the sky and as we take an image that trail of light gets left behind on an image and that obscures what we’re trying to look at," said Rogers.

This week, SpaceX shared that some 500,000 people have put orders for the Starlink service so far. It won’t roll out more fully until later in the year.