Municipal elections were held on Tuesday, but ballots were still being counted in Bloomington on Friday afternoon.

BLOOMINGTON, Minn. (FOX 9) - Municipal elections were held on Tuesday, but ballots were still being counted in Bloomington on Friday afternoon.

This is the city's first year using a ranked-choice voting system, and since none of the candidates in three City Council races reached the threshold to win in the first round, election judges have been hard at work, counting paper ballots by hand in City Hall since Thursday.

"I think the challenges for counting paper ballots are that you really have to have a good, solid team," said Christina Scipioni, a Bloomington city clerk.

The state of Minnesota hasn't approved any software that would automate the process, so cities have two options for counting ranked-choice ballots.

"It's the hand tabulation or basically a spreadsheet tabulation," said Scipioni.

She says the decision was made to do things the old-fashioned way so residents could stop by and see the process in action firsthand at City Hall.

"I always like it when we can do things more efficiently, but it's kind of up to the Legislature to decide what their comfort level is and what they would want to see in statute as far as allowing us cities to use that software," said Scipioni. 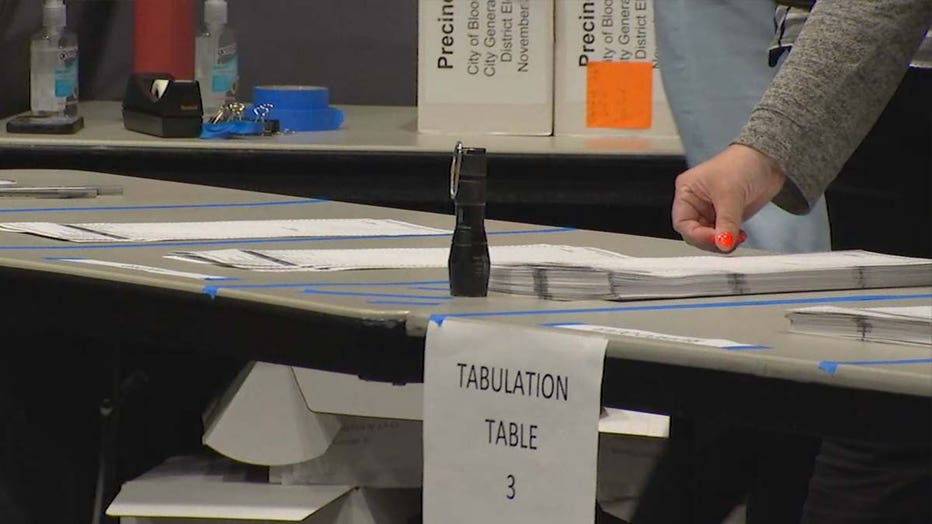 Ballots are being counted by hand in Bloomington, Minnesota. (FOX 9)

"I was anxious to see how it works," said Sharon Billings, who is a Bloomington resident and campaign manager for one of the candidates.

She says she's a fan of ranked-choice voting, but that doesn't make the waiting process any easier.

"From a candidate's perspective, it can be a little frustrating because we have to wait while all the ballots are being tallied," said Billings.

As of Friday afternoon, winners have been declared in two of the three City Council races​.

Ballot counting will start back up at 9 a.m. on Saturday ​morning and is expected to wrap up by Saturday afternoon.