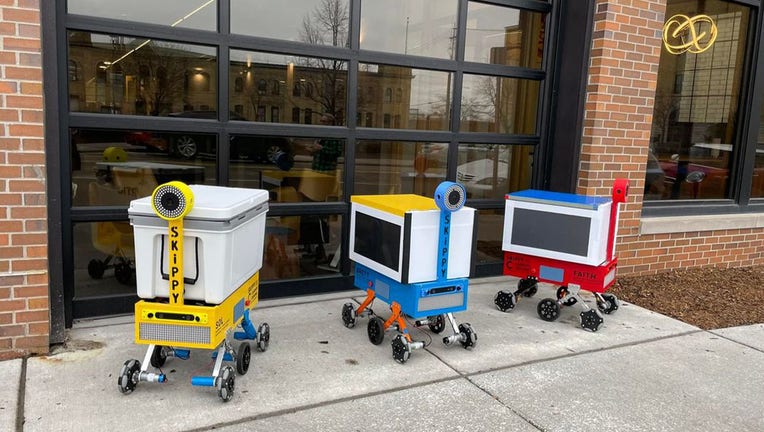 MINNEAPOLIS (FOX 9) - As restaurants continue to grapple with a shortage of workers in the service industry, there’s an increasing chance if you’re dining in Northeast Minneapolis your next delivery might be made by ‘Skippy.’

Carbon Origins has announced it will unveil the affectionately named delivery robots in Minneapolis next month.

According to a new release, each Skippy will complete deliveries using a combination of artificial intelligence, machine learning and a "metaverse" workforce of operators called ‘Skipsters’ who supervise and train them through a virtual reality interface.

Skipsters can work from any location, using any commercial virtual reality headset, thereby making the gig economy more accessible, sustainable and safe for workers, according to Carbon Origins.

"The community of Skipsters we have built is extremely excited and engaged," said CEO Amogha Srirangarajan in a statement. "We host VR events that attract hundreds and have a waiting list of over 300 Skipsters from around the world to join the team."

Skippy will initially be making deliveries in partnership with Fletcher’s Ice Cream and SiP Coffeebar, with plans to add more in the works.

Carbon Origins first launched their ‘alpha’ offering in the skyways of St. Paul, Minnesota, where they participated in the Techstars Farm to Fork Accelerator. The "Skippies" starting in Minneapolis will have a series of upgrades including real-time artificial intelligence training, advanced safety features, visual displays, and improved connectivity.

"Carbon Origins is leveraging the metaverse to reinvent how physical work gets done in the real world, starting with the tough challenge of last mile delivery," Brett Brohl, managing director of the Techstars Farm to Fork Accelerator said in a statement. "This team and this tech could not be more impressive."