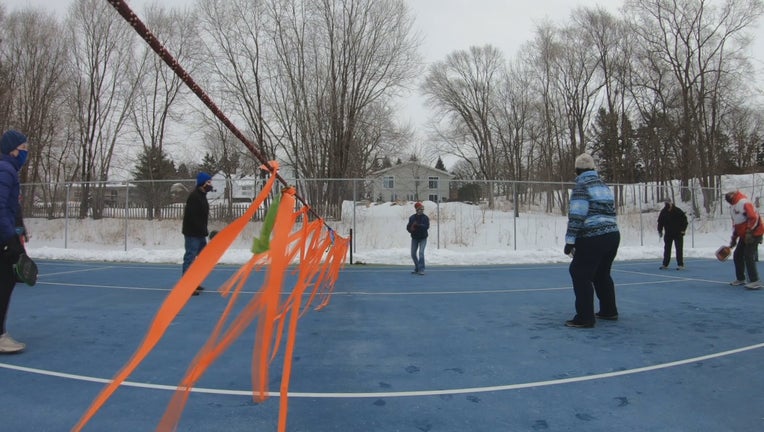 A group of seniors play their version of pickleball despite cold temps in Mendota Heights, Minnesota. (FOX 9)

MENDOTA HEIGHTS, Minn. (FOX 9) - A group of seniors in Mendota Heights, Minnesota are not letting cold temperatures or a pandemic get in the way of their passion for pickleball.

Seven days a week and at just about any temperature above single digits, you’ll find a fun-loving group of seniors at the tennis court at Marie Avenue Park. The players range from people age 65 to Jack Fecht, the so-called commissioner, who is about to turn 84.

Seniors in Mendota Heights not letting cold temps, pandemic get in way of pickleball passion

A group of seniors in Mendota Heights, Minnesota are not letting cold temperatures or a pandemic get in the way of their passion for pickleball.

"I decided to clear it off, put up a net and see who would come play," Fecht said. "We made the net. Piece of cake."

The usual pickleball courts at the park are covered by the hockey rink this time of year and when the snow started piling up, eventually the tennis nets had to be taken down by the city. So the group, loosely connected by playing pickleball together at the YMCA, needed a way to keep the game going outdoors.

"You can’t go inside, or a lot of us don’t want to go inside because of the pandemic," explained Jeannie Janisch, the scorekeeper.

"It’s fun, it’s the camaraderie of the group," said Dave Hanson, who’s on the cleanup crew. "My doctor says keep it up. It really is good exercise."

The game the group plays is actually a cross between pickleball and volleyball. They call it pickle-volley or volley-pickle, depending on who you ask, because they have too many people on the court. They’ve made up their own rules, play through the snow, then quickly clear it.

Anyone with a sense of humor and a paddle is welcome, including the new mayor, Stephanie Levine.

"There are people with multiple new joints who are so much better than I am," Levine said. "I consider them an inspiration."

It’s an hour and a half each day that a growing group of about 20 people looks forward to. "I personally feel as the pandemic is going along my mood is changing and not for the better, but I come out here, and my mood changes."

While the score is frequently forgotten, having a good time is all that counts.