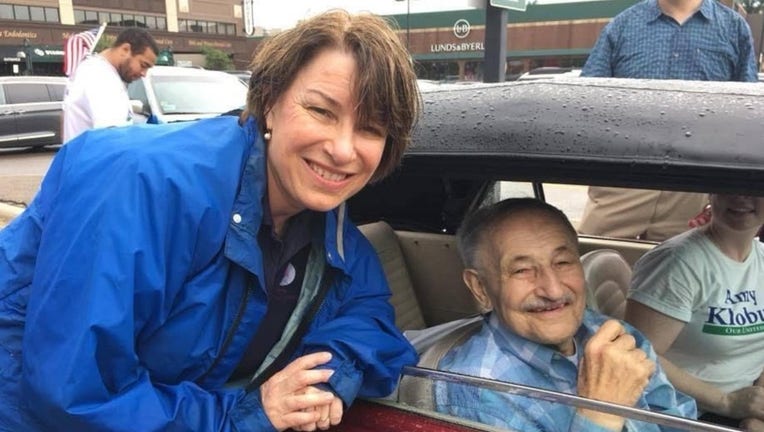 Sen. Amy Klobuchar poses for a photo with her father Jim Klobuchar while on the campaign trail. (Klobuchar Press Office)

(FOX 9) - Jim Klobuchar, longtime journalist and father of Minnesota U.S. Senator Amy Klobuchar, has passed away following a battle with Alzheimer's disease. He was 93 years old.

Jim Klobuchar grew up in the Iron Range in northern Minnesota as the son of a miner. He would go on to become a journalist for the Associated Press in Minnesota and later the Star Tribune for which he wrote a general public interest column that garnered national acclaim. When he retired in 1995, he had written over 8,400 columns.

"Through his columns my dad told stories of the ‘heroes among us,’—ordinary people doing extraordinary things. He used his words to stand up for people," said Klobuchar in a statement. "But he also stood up for me, from urging me on to finish a father/daughter ten-day 1100-mile bike trip from Minneapolis to Jackson Hole, to believing that a woman could actually win a Minnesota U.S. Senate seat."

Jim Klobuchar, a veteran, will be buried at Fort Snelling in Minneapolis. Details for a public event will be released at a later time.

In lieu of flowers, donations can be directed to the University of Minnesota’s School of Journalism and Mass Communication, where a scholarship will be established in his name. Donations can be made at this link.