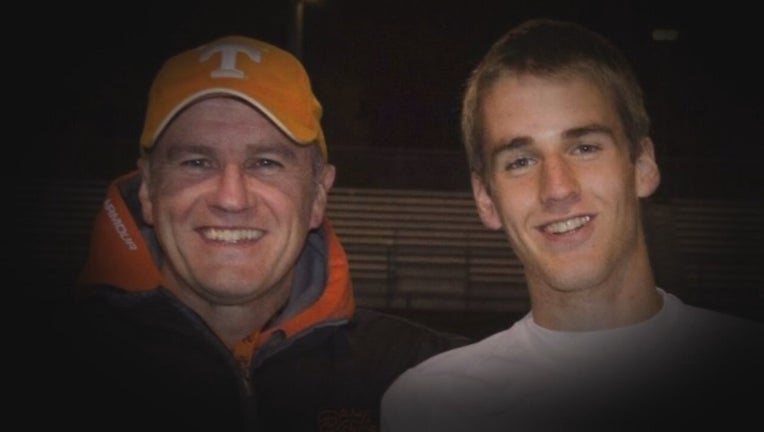 Damian (left) and Evan McManus died while on a hiking trip in Colorado in 2014. (Spam FC)

ST. LOUIS PARK, Minn. (FOX 9) - Tuesday will mark seven years to the day a father and son from St. Louis Park were reported missing after going on a hike in Colorado. Damian and Evan McManus' remains were found a few months later, but friends and family are keeping their memory alive through their favorite sport.

"Damian was a soccer fanatic. He loved the game," said Van Hong of the Spam FC Scholarship Foundation. "Evan was a rising star. He was cheeky. He had phenomenal footwork. He was just a great kid off the field."

Damian and Evan McManus' died on a hiking trip in 2014, but friends and family are keeping their memory alive through their favorite sport.

Damian and Evan shared a love of soccer - Damian as a coach and referee and Evan as a player for St. Louis Park High School. Now this father and son's passion for the game will help the next generation of players.

"I think it’s great," said Hong. "Any time we can continue to honor the people that we've lost too soon, it's an incredible opportunity."

It was April of 2014 when the McManuses disappeared during a spring break bonding trip after heading off to hike up Mount Evans about 40 miles southwest of Denver. Search teams spend thousands of hours scouring the Colorado wilderness until they found their remains months later a couple of miles from the campground where they parked their car. The coroner says they died from exposure.

"I was devastated," said Hong. "To lose people like that in your life is incredibly sad. Evan. Damian. I love you guys. This one is for Team McManus."

Over the weekend, the Spam FC Scholarship Foundation held a virtual fun run to raise money for two scholarships named after Damian and Evan. They raised $4700 to help recent high school graduates and college students pay for school.

Applicants can apply by writing an essay about how soccer has had a positive impact on their lives.

"I'm just incredibly happy that we can get to support and continue to get the people to provide support for their legacy," said Hong.

In all, 10 scholarships have been given out in Damian and Evan's names and organizers say what better way to make sure their spirits live on.

"It’s about keeping their memory alive," said Hong. "Just because they are gone. They shouldn't be forgotten. Whatever we can to support and honor them we're going to do our very best to do that."

The application process for the next round opens up on May 1 and runs through June 30. Spam FC plans to give out another $25,000 in scholarships this year.