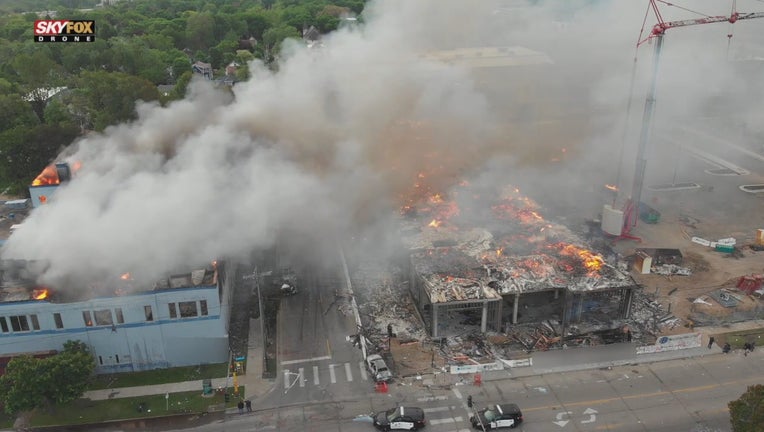 Buildings burn following riots in Minneapolis after the death of George Floyd. (FOX 9)

ST. PAUL, Minn. (FOX 9) - Several owners of businesses that were damaged or destroyed in the 2020 riots pleaded with state lawmakers for financial help Tuesday.

On a 11-8 vote, the House bonding committee passed a $300 million rebuilding fund supported by Democrats. No Republicans voted for it, with GOP members arguing it would turn into a bailout for Minneapolis and St. Paul city leaders.

Owners of businesses destroyed in the 2020 riots are pleading with Minnesota lawmakers to help them rebuild, but a $300 million plan to do it is pitting the Twin Cities against greater Minnesota at the Capitol.

The proposal would send $200 million to Minneapolis and $100 million to St. Paul for business redevelopment. The money would be borrowed through a bond sale, sending the final cost to the state far higher.

Louis Lau, the co-owner of Peking Garden restaurant in St. Paul's Midway neighborhood, said rioters destroyed his business by setting it on fire in May 2020. He's relocating nearby, but said it hasn't been easy.

"I’m here to let you know we’re still suffering, and we need the help of the state to ensure our businesses can survive under the current economic environment," Lau told House lawmakers.

As many as 1,500 businesses in Minneapolis and St. Paul were damaged or destroyed over four nights of rioting following the death of George Floyd, a Black man. A now-fired Minneapolis police officer held him to the ground for several minutes by pressing his knee into Floyd's neck.

Property damage has been estimated by city economic officials at $500 million.

Local and private aid has flowed to some of the affected businesses, but it amounts to just a fraction of the damage.

Business owners are finding out their insurance will often cover around 25 percent of the losses, said Allison Sharkey, executive director of the Lake Street Council in Minneapolis. Lake Street was the hardest hit area during the rioting.

Gov. Tim Walz has proposed a similar borrowing plan, though his totals $150 million -- half as big as the House proposal. Senate Republicans have not proposed a dollar figure.

With interest payments, the total cost of the House plan will be around $435 million over the next 20 years, House nonpartisan staff said Tuesday.

Republicans have blamed city officials in Minneapolis and St. Paul for failing to contain the violence more quickly. GOP members said those same officials should not be put in charge of rebuilding funds.

"I'm heartbroken at what happened. Unfortunately, it is the result of failed leadership in those cities," said state Rep. Eric Lucero, R-Dayton. "I'm concerned the bill creates an open-ended fund for cities."

In Minnesota's divided state Legislature, support from both parties is required for a bill to become law.

The Twin Cities-versus-Greater Minnesota divisions have been on display repeatedly this session. The same issue is holding up funding for security during the trial of Derek Chauvin, the ex-cop accused of murdering Floyd. Chauvin's trial is scheduled to start March 8.