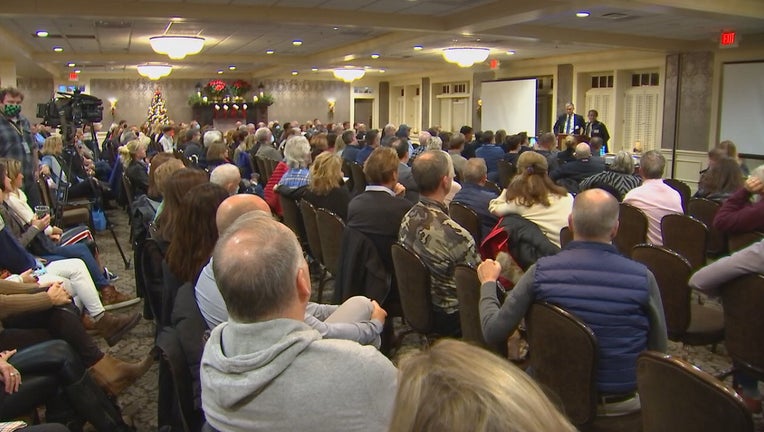 Speakers at the Edina Country Club raised concerns about crime on Tuesday. (FOX 9)

EDINA, Minn. (FOX 9) - Edina residents gathered Tuesday night to hear from the city's mayor and police chief about concerns over increased crime in the city.

The meeting was held at the Edina County Club Tuesday evening and gave invited residents a chance to voice their concerns about the crime.

Residents voice concerns on crime at meeting in Edina, Minn.

Edina residents gathered Tuesday night to hear from the city's mayor and police chief about concerns over increased crime in the city.

Along with a reported attempted carjacking at the Lunds & Byerlys last week, which police say may be connected to incidents in St. Louis Park, Edina police have reported six robberies between mid-October and December 5. Six robberies in less than two months is higher than the city's totals for the entire years of 2013, 2015, and 2017 respectively.

One speaker, a Minneapolis resident who lives not far from the Edina border, recounted a recent incident where her son was the victim of a carjacking after the date.

"Everything was stolen, the gun was jammed to his neck," the woman recalled. "They took everything, they took the car."

A FOX 9 news crew at a Lunds & Byerlys store in St. Louis Park to cover a previous robbery helped intervene in an attempted carjacking in the store parking lot on Thursday. The attackers carrying some type of weapon, attacked a driver in a black Mercedes. Our crew yelled and honked a horn to get the crew to run away.

The mayor thanked the speakers and promised the city was taking the crime seriously.

"The stories you've heard tonight are extraordinarily important," explained Mayor James Hovland. "But I can tell you, in Edina, you don't need to push us to be responsible to all of you. There was an oath we took."

Referencing a letter he sent out last week, the mayor said it's going to take more than just a police effort alone.

"It's going to take a whole community," said Hovland. "I wrote last Friday we needed eyes on the street, we needed to be thinking about how we're going to take care of each other. We need you to respond quickly if you see something that looks suspicious, trust your gut, if it seems weird, say something. We don't care if you call 911, we want you to call 911."

Tuesday's meeting came on the heels of an announcement from the Hennepin County Attorney's Office that prosecutors would be dedicating more resources to prosecuting carjackers.