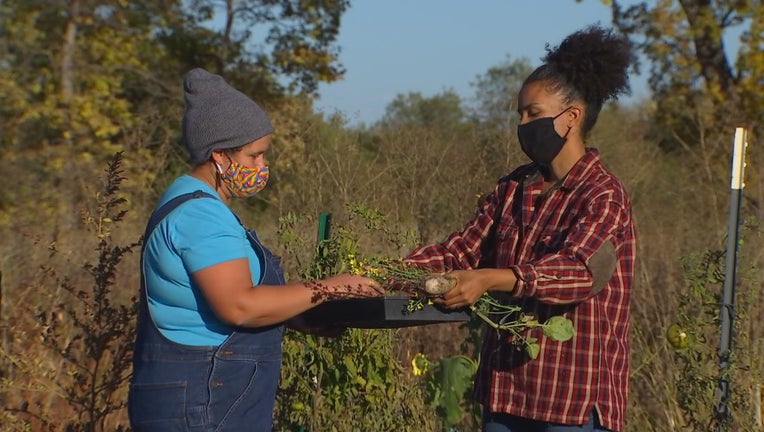 Lizy Bryant (right) helps her friend tend a plot in St. Paul's Frogtown Farms, but hopes one day to own a farm. (FOX 9)

OAK GROVE, Minn. (FOX 9) - Minnesota has a vibrant agricultural community, but some people have been left off the farm. There’s a renewed effort by some African-Americans to go into farming and become stewards of the land.

The growing season may be over for Lakisha Witter, but some of her ideas are beginning to take root.

Renewed effort to increase amount of Black farmers in Minnesota

Minnesota has a vibrant agricultural community, but some people have been left off the farm. There’s a renewed effort by some African-Americans to go into farming and become stewards of the land.

"I think we put a lot of emphasis on being the next NBA player or the next football player, but farming is a thing too,” said Witter. "It's a big thing. It's the future of the world we live in."

Even though she has no formal training and no one in her family is involved in farming, the Bethel University professor bought a five-acre farm in Oak Grove about three years ago - both to live a healthier lifestyle and to learn more about the food she puts in her body.

"I remember growing up as a kid, my punishment was to go outside because I was a reader,” she said. “I didn't want to get dirty, so I never thought in a million years that I would be loving the outside."

"Zucchini. Squash. Peppers. You name it, we pretty much grow it," she said.

As a Black female farmer, plowing some new ground has yielded a bounty of interesting reactions.

"I've been at the markets before, I’ve talked to people and people look at me, like you don't look like a farmer,” said Witter. “And I have to dig deeper and say what does a farmer look like? So, I use these moments as moments to reeducate them and tell them the way you think of farming being predominantly male or white is changing. There's more people who are coming into it and it’s okay if I look different."

According to the United States Department of Agriculture, less than two percent of all farms in the country are owned or operated by African-Americans. In Minnesota, that number is just .03 percent. In fact, the latest Census of Agriculture found only 39 Black farmers out of more than 68,000 in the entire state.

"In essence, agriculture is still very white in Minnesota,” said Patrice Bailey, the assistant commissioner of the Minnesota Department of Agriculture. "I'm surprised that the number is so low. The whole point is to be able to increase the number."

In a recent report on emerging farmers in Minnesota, the state department of agriculture found access to land and the financing to buy it are the biggest barriers for people of color to get into farming. Since there are fewer farmers of color, there are also fewer opportunities for family farms to be handed down from one generation to the next like their white counterparts.

"Discrimination is rampant whether it's predatory lending when it comes to loans or denial of those loans,” said Bailey. “There's always discrimination in terms of ethnicity."

"We have a lot of work to do, but there is no time like the present,” Bailey added. “I think about our brightest scientists, like George Washington Carver, would be really excited to see how there are more emerging farmers regardless of color that are taking more interest in the land and being more protective of the land."

Lizy Bryant may be helping her friend tend a plot in St. Paul's Frogtown Farms, but she plans to own her own farm one day.

She started a crowdfunding campaign that has raised more than $80,000 of its $365,000 goal to buy her aunt's 25-acre farm in southern Minnesota to operate as both a goat cheese dairy and a rural gathering space for Black Minnesotans.

"To come and be nourished and nurtured and to just be without fear or threat of violence in a beautiful natural landscape I feel is an incredibly important and healing and nourishing thing," said Bryant.

Witter says planting the seeds to produce more farmers of color is an idea that its time has come and by doing so, she believes Minnesota can put its own harvest of shame out to pasture.

"I think with all the changes going on in the world, why not shake up farming? Why not shake up agriculture? This is the perfect time to do it,” said Witter.

The Minnesota Department of Agriculture offers a microloan program to help nontraditional farmers buy equipment and other assets. It also operates a directory of farmers with no heirs interested in selling or renting their land to a beginning farmer. The agency also recently created an emerging farmers working group. Its goal is to make it easier for beginning farmers from underserved groups to create an agricultural business.