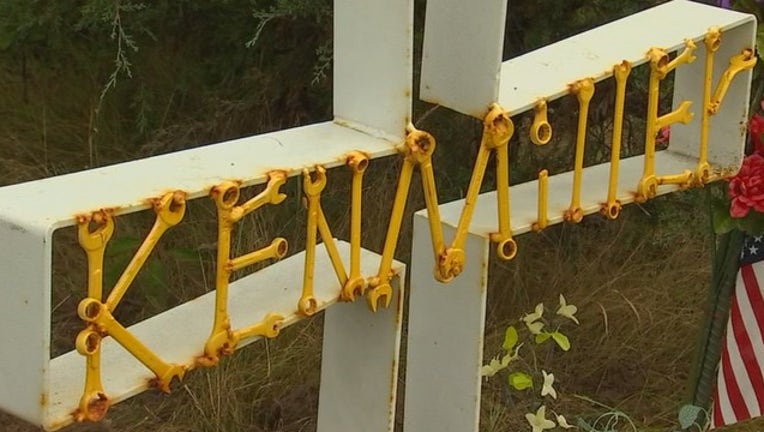 ST. FRANCIS, Minn. (KMSP) - A son’s tribute to his father, who was killed in a motorcycle crash, is now back after the Minnesota Department of Transportation removed the roadside memorial last week.

About a week after MnDOT took down the roadside memorial Nick Bourdon made for his father, the steel cross Bourdon welded out of his dad's old wrenches is back where it belongs.

"Beyond happy,” said Bourdon. “It's where it should be."

Bourdon created the memorial to mark the spot where Ken Miller died in motorcycle accident near Highway 47 and Ambassador Boulevard in St. Francis four years ago. When Bourdan drove by the intersection a week ago, he noticed it had been moved. He later learned a highway maintenance crew had taken the memorial to the MnDOT truck station in Cambridge.

"I was outraged,” Bourdon told Fox 9 last week. “I was crying to beat the band. I got probably 20 hours into making that thing."

On Monday, MnDOT told Bourdon he could return the memorial as long as he moved it back about four feet. A MnDOT crew later moved it back even further after they put up a line to mark the border of the right of way because it is illegal to put anything closer to the road.

"I think we came to a good resolution,” said Kevin Gutknecht, MnDOT communications director. “We've had situations like this in the past where we've been able to affect a change like this with other roadside memorials. It can certainly be a challenge, but we want to be sure the road is there to serve its purpose for transportation."

Bourdon still wants to put some finishing touches on his dad's memorial. Now he can breathe a little easier knowing the fate of his tribute to his father has been put to rest.