Officials said two people were wounded – one of whom was flown to the hospital – in the shooting that happened shortly before 2:30 p.m.

"I heard it was mass chaos here. People were running and people got in cars and people were screaming," Racine Police Sgt. Krisit Wilcox said.

The shooting happened during the burial ceremony for Da'Shontay King – the man who was shot and killed by police in May.

"Last place I would ever expect something like this to be happening," said Racine resident Chandler Rorek. 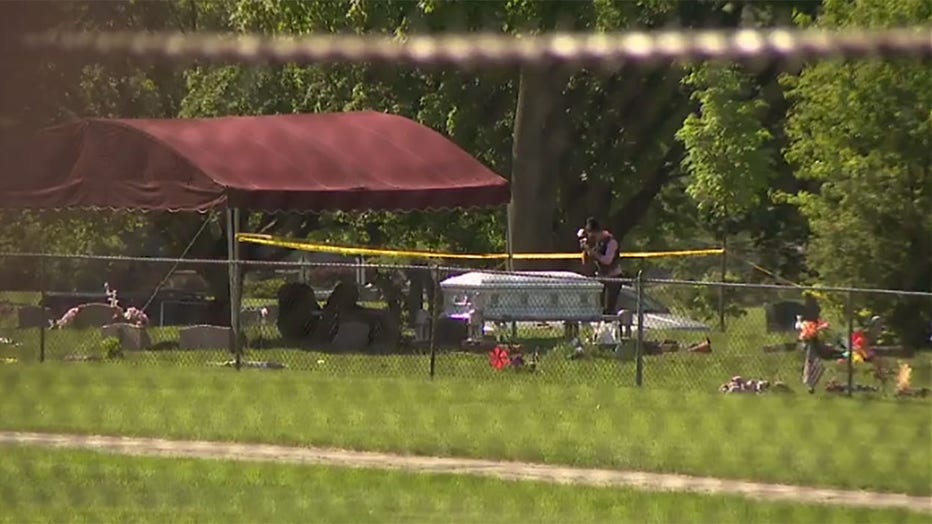 People went from laying a life to rest running for their lives. In a place usually home to quiet mourning, Facebook videos show what happened after gunshots broke the peace.

"I thought I heard probably 30, 40 gunshots going off. It sounded like different kind of guns," Heidi, who lives near the cemetery, told FOX6 News.

One of the two people wounded was a girl who has since been released from the hospital, police said. The other victim was flown to a Milwaukee hospital for treatment, and their condition is unknown.

"Right now, we’re asking for calm and no retaliation of any kind. This city has seen enough right now, and we’d like to be able to rest for a little bit," said Wilcox.

Racine police on Wednesday night provided an update regarding a shooting at Graceland Cemetery.

It is rest that people living near Graceland Cemetery say was not found at Thursday's funeral. That includes Racine resident Ernie Stickles, who said his friend was at the funeral.

"My good friend, he was doing a (Facebook) live afterwards, and yeah, he seemed pretty upset," Stickles said. "He was like, ‘Man what do we got to do?’ There’s nothing you can do. Nothing."

Video from someone at the scene showed the aftermath after "multiple shots fired" at a Racine cemetery Thursday. (Credit: Maurice Ford via Storyful)

One man who asked not to be identified, told FOX6 he was at the funeral and the shooting may have started during the procession on the way to the burial site. Police weren't able to confirm that.

The public was asked to avoid the area during the ongoing investigation. The cemetery is bordered by Osborne and Ohio to the east and west, and between Spring and Kinzie to the north and south.

Ascension All Saints Hospital, located a half-mile away, said it was upping security due to "an active shooter situation." There was no immediate threat to the hospital, and the emergency room remained open and patients kept their appointments. Normal operations resumed at 6 p.m.

Police are not able to say if they're looking for multiple shooters or what led to the shooting. No suspects are in custody.

In response to the shooting, Racine Mayor Cory Mason said he has instructed police to "actively enforce" the city's juvenile curfew through the weekend. It means anyone under 18 years old must be home by 11 p.m.

"We’ve been monitoring the shooting earlier today in Racine and have been in contact with our local partners to offer support. As we await additional information, we are praying all involved survive and recover.

"Gun violence has to stop."

"Today's heinous shooting at a cemetery while a family was already mourning the loss of a loved one is a new low for these perpetrators of violence in our community. The violence has got to stop! Revenge is not the answer. Ending gun violence is the top priority of the police department and my administration. I have spoken to the Governor and Attorney General to request more resources to support violence prevention. I am instructing the police department to actively enforce our juvenile curfew ordinance through the weekend. Anyone under 18 must be home by 11 PM. This violence must end. If you have any information about the horrific events of today, I urge you to contact the Racine Police Department immediately."