TRAVERSE CITY, Mich. (AP) - Wolf pups have been spotted again on Isle Royale, a hopeful sign in the effort to rebuild the predator species’ population at the U.S. national park, scientists said Monday.

It’s unknown how many gray wolves roam the island chain in northwestern Lake Superior. The coronavirus pandemic forced cancellation of the census that Michigan Technological University experts had conducted each winter for 63 years.

Remote cameras detected four pups on the park’s eastern end in January, the researchers said in a new report. The sightings, and additional clues such as previously observed scats and tracks, suggest that two litters were born in the area last year and perhaps another on the western side. 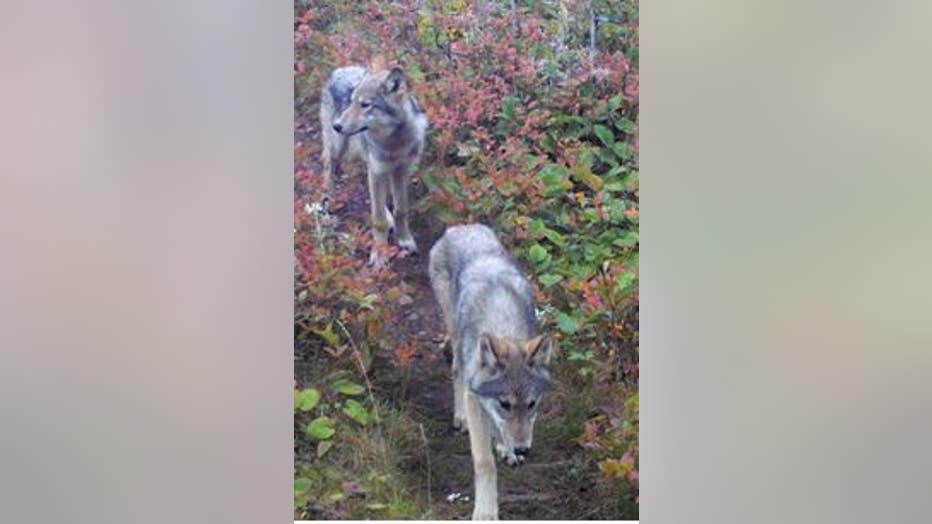 The population was 12 to 14 during the last Michigan Tech survey in winter 2020. The latest births would indicate it is higher now, but some older wolves may have died.

"It most likely will be winter of next year before we have firm information," said Sarah Hoy, a research assistant professor and animal ecologist, adding that the presence of young wolves is reason for optimism. "Things are definitely looking up."

Scientists with Michigan Tech, the National Park Service and State University of New York will combine available information with genetic analyses to produce a population estimate based on death rates and numbers of litters.

An initial data summary should be finished this month, said Mark Romanski, a biologist and natural resources program manager at Isle Royale.

"Because of constraints placed on field activities during the pandemic, we are especially pleased to have multiple lines of evidence to enumerate the population," he said.

Wolves are believed to have migrated to Isle Royale from Minnesota or the Canadian province of Ontario around the middle of the 20th century, crossing about 15 miles (24 kilometers) over the frozen lake surface.

Once established, they began feasting on the park’s abundant moose and helped keep the herd from outgrowing its food supply. But wolf numbers plummeted in the past decade, which scientists blamed primarily on inbreeding.

The National Park Service announced plans in 2018 to restore the population, which had fallen to two. Crews took 19 wolves from Minnesota, Ontario and Michigan’s Upper Peninsula to the island in a series of airlifts. Some have died and at least one wandered back to the mainland but most appear to be settling in.

"They’re killing moose, starting to function as they should," Hoy said.

The goal is to have 20-30 wolves within three to five years. Officials haven’t decided whether to bring more in, park spokeswoman Liz Valencia said.

"A healthy park ecosystem includes a variety of wildlife and abundant food sources," said Christine Goepfert, Midwest associate director for the National Parks Conservation Association. "As wolves bounce back after nearly disappearing from the park, their presence as a predator on the island will help all wildlife and native plants thrive at Isle Royale."

The wolves’ decline fueled a moose boom between 2012 and 2019, when the population may have reached 2,000 before dropping to 1,876 last year. It appears to have fallen further since, the report said.

During vegetation surveys this spring, researchers found 15 moose dead from starvation. Balsam fir saplings, their primary winter food source, were in "the worst condition ever observed" as moose munched every available branch, Hoy said. Blood-sucking ticks that thrived during the mild winter made things worse.

Also during the past year, personnel with the park service and Michigan Tech organized thousands of moose bones that have been gathered at Isle Royale. They’re being cleaned, photo-documented and entered into a database. The collection eventually will be housed in a museum.

"It is gratifying to see the National Park Service invest in the long-term preservation of moose bones, and it is almost certain that the scientific value of the collection will increase over time," Michigan Tech wildlife ecologist Rolf Peterson said. "We have already put it to use in ways never anticipated when the bones were first collected and saved."