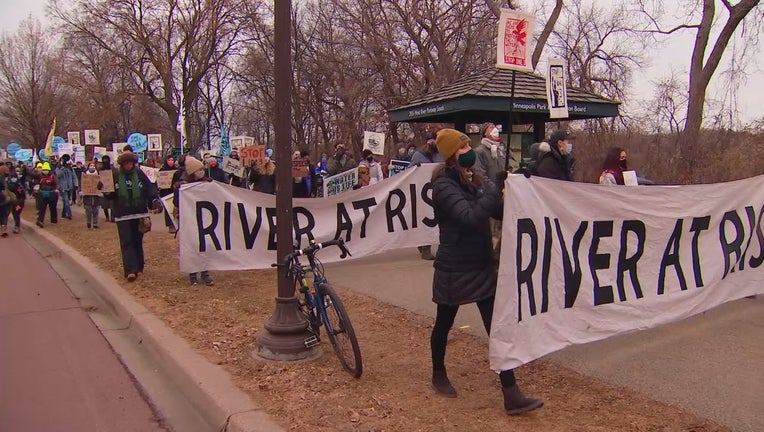 Protesters rallied around the Twin Cities metro on Sunday against the Line 3 project.

MINNEAPOLIS (FOX 9) - Sunday kicked off a series of rallies expected to take place throughout the metro in response to dozens of people arrested for trespassing in Northern Minnesota near the Line 3 construction site.

Protesters in Minneapolis on Sunday were rally against the construction of the Enbridge Line 3 pipeline project in Minnesota.

The rallies are to stand in "solidarity with the water protectors there who are committed to protecting our climate and our communities in the face of the Walz Administration’s dismal failure to do that," organizers stated.

"I’ve been a part of this fight for the last four years. I started in college," said Wisconsin resident Taylor Stevens. "It’s a really big issue for me because I struggle with autoimmune diseases and if our water is poisoned from oil companies, my health will automatically diminish."

Stevens joined hundreds of other protestors at West River Parkway speaking out against Line 3 despite the state’s recent approval of permits allowing Canadian company Enbridge to begin construction.

Built in the 1960s, Line 3 is a 1,097-mile crude oil pipeline that extends from Canada to Wisconsin.

The Line 3 Replacement Project will change out old crude oil pipes with new ones for 13 miles in North Dakota, 337 in Minnesota, and 14 miles in Wisconsin. Minnesota state leaders said replacing the pipes would move more barrels of oil across the region.

"I’m really heartbroken and I feel let down by Gov. [Tim] Walz," said Taysha Martineau, an organizer with Gitchihumi Scouts.  "I’m here today because the Line 3 pipeline impacts the indigenous community that I come from."

Opponents said they remain hopeful despite the greenlight from the state.

"There are still lawsuits that haven’t been heard in court yet and I believe those indigenous communities deserve their day in court," Martineau added.