Protesters spray painted the driveway of a Minneapolis police officer believed to be involved in the George Floyd killing. Video Courtesy: Jackie Baxter

OAKDALE, Minn. (FOX 9) - More than 100 protesters have gathered in a neighborhood in Oakdale, Minnesota near the home of an officer, who is believed to be involved in the death of George Floyd.

Oakdale police officers have blocked off the area at 17th Street North and Helmo Avenue. Officers are lined up across 17th Street to prevent protesters from moving into the area. Traffic barricades have also been positioned in other parts of the neighborhood.

Protesters gathered outside the home of a believed Minneapolis police officer who is believed to be involved in the killing of George Floyd. Video Courtesy: Jackie Baxter

Video shared with FOX 9 shows spray paint on a driveway and the word "Killer" written on a garage door. Oakdale police are asking for people to avoid the area.

Protesters gathered in the neighborhood Tuesday as well while protests broke out near the Third Precinct in Mineapolis.

George Floyd died after being arrested by Minneapolis police on Memorial Day. Video surfaced of the arrest showing an officer pressing his knee into his neck, while Floyd repeatedly said he could not breathe before losing consciousness. The four Minneapolis police officers involved in the incident have been fired. 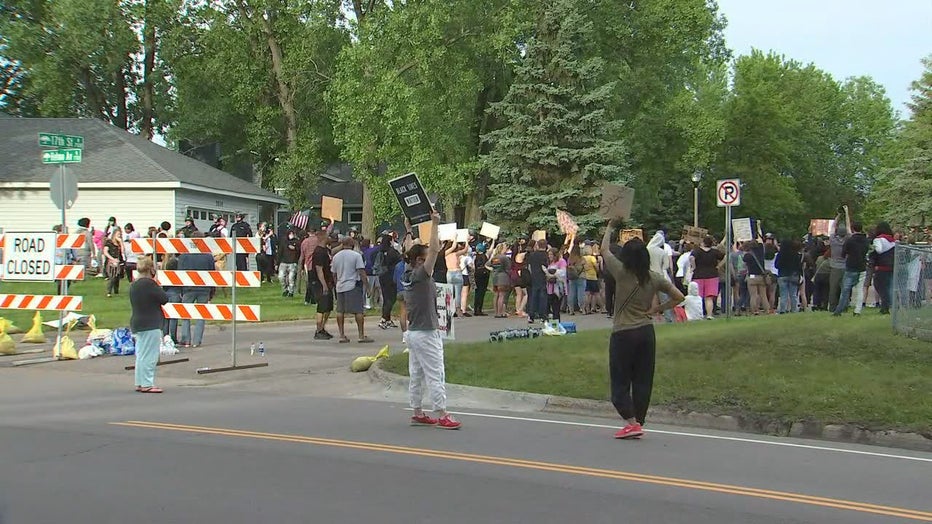 Protesters gathered in the neighborhood of an officer believed to be involved in the George Floyd death. (FOX 9)