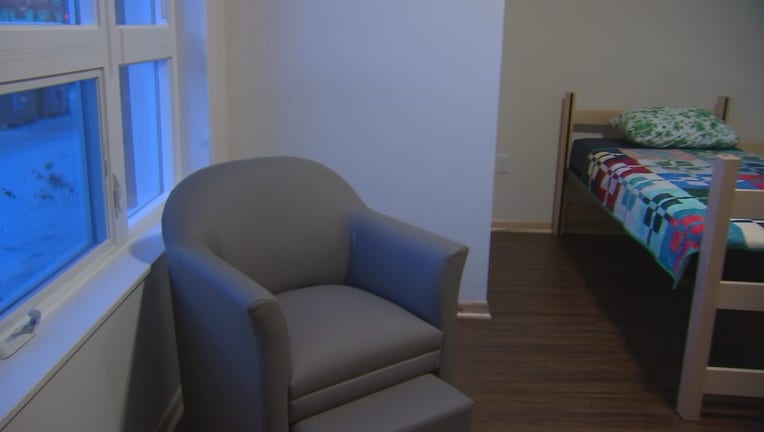 This unit is one of 44 in a new facility built for older, low-income, chronically homeless Minneapolis residents at the site of the once burned down building. (FOX 9)

MINNEAPOLIS (FOX 9) - A site of heartache has turned into a place of hope in Minneapolis.

It was the spot where a deadly fire ripped through a pub and apartments on East Lake Street, but now it’s getting new life as a permanent, low-income housing space.

It was once the site of a fire that killed six, but now officials think what was built in its place might save lives.

The grand opening was held Tuesday, showcasing the building’s 44 units, 37 of which are already inhabited.

They are simple, efficiency apartments that are a castle to those who’ve found homes there.

For this official grand opening, tours were given to invited guests and neighbors to show off what is now called, “Minnehaha Commons.”

The apartments are geared towards those 55 and older who have been chronically homeless. It’s a project 10 years in the making.

“It’s great,” Program Supervisor Vanna Preska said. “The people we’ve been able to work with to get moved in and there are so many more who could benefit from something like this.”

It’s another dent in homelessness, a problem seen as solvable in Minnesota.

“1.3 percent of our population is homeless, unlike in other states, the highest being California, where it’s 18 percent of the population that’s experienced homelessness. We can solve homelessness in Minnesota if we put the resources towards the issue,” said Ellie Skelton, of Touchstone Mental Health.

In April 2010, at the corner of 30th and East Lake Street, the fire ripped through McMahon’s Bar and the apartments above it. The blaze killed six people.

The bartender who lived there and his girlfriend’s family are staying in the new facility because they too were homeless.

“Today this place, this beautiful set of homes, is proof of what’s possible,” said Cathy Ten Broeke, the assistant commissioner of Minnesota Housing.

There will be a memorial mosaic installed in Minnehaha Commons for those lives and it seems so fitting.

Once, there were lives lost on that Minneapolis corner, but officials now hope that lives can be saved there too.

“After being homeless for two years, I am so very grateful and thankful for Minnehaha commons,” one resident said.