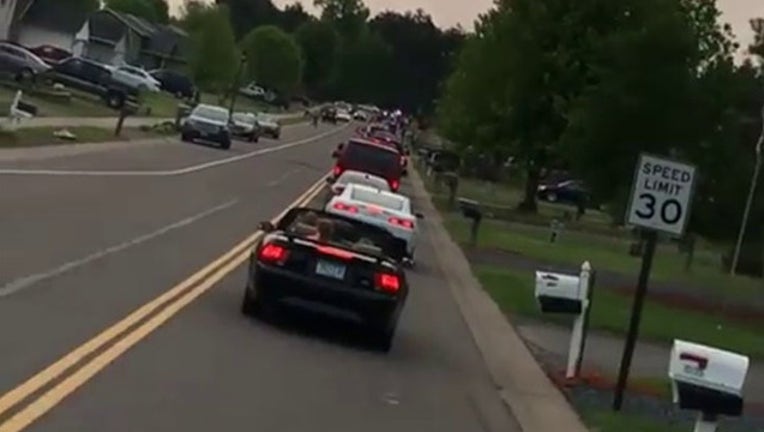 The North Branch Police Department detailed the morning’s events after receiving a number of calls, comments and concerns about their stop of the “parade.”

According to police, the incident began when officers were dispatched to Athens Trail on a complaint of ATVs driving carelessly. When the officers arrived in the area of Forest Boulevard and 372nd Street, they encountered approximately 30 ATVs and other off-road vehicles riding two to four abreast across lane of traffic and the shoulder.

Several of the vehicles were also riding in the ditch and jumping driveways, police said.
After determining the vehicles were violating state regulations for off-road vehicles, the officers decided to stop the “parade.”

As the group turned east on 377th Street, one of the ATVs pulled out in front of the squad car, which had its lights activated, going over the double yellow, no passing zone and traveling in the oncoming lane of traffic for approximately 100 yards. Police said the driver will be cited for the violation.

Once the officers had stopped all the off-road vehicles, they ordered the drivers to shut them off and called for trailers to remove the vehicles from the road. Farm tractors and other vehicles involved in the parade were told they were free to go because they had not committed any violations that the officers could see.

One of the ATV riders fled the scene, but a Chisago County Sheriff’s deputy was able to locate them. They will be charged for leaving the scene.

While waiting for the trailers to arrive, a nearby resident approached the officers and said the ATVs were “welcome to move into her yard to clear the roadway,” police said. The ATVs were then moved onto private property and the road was reopened to normal traffic.

Another resident reported someone had parked their ATV in their backyard and walked away. They wanted the ATV removed, but the owner of the ATV returned before the tow truck arrived.

In all, only two ATV riders will receive citations for their violations.

Police also noted that several of the ATV riders were wearing “helmets” that were nothing more than hard hats.

“If this had actually been done safely, there would not have been cause for the stop,” police said in a news release. “The lead officer in the incident has been with the department since 2001 and [this] is the first time he felt that intervention was warranted.”