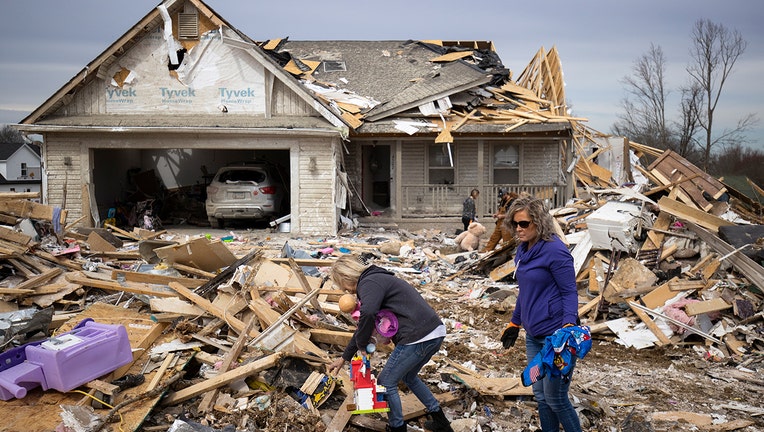 NASHVILLE, Tenn. - Following the devastating tornadoes that ripped across the Nashville area, killing at least 24, a thread on Twitter showed local residents doing what they can for each other to help rebuild their communities in the wake of the destruction.

“A thread on good humans and good deeds of the Nashville #TennesseeTornadoes," tweeted Lauren Blanchard, who is a correspondent at FOX News.

Her first post was of a man bringing saws to neighbors to help cut up uprooted trees and other debris.

“First - this is Sam. His house is fine - so he’s brought his saws down to East Nashville & is walking around offering to help cut up trees & debris.”

Locals impacted by the deadly twisters were hard at work giving out food and supplies to those in need.

Someone left a pile of supplies, which included water and trash bags.

“Then we have this - someone left a pile of supplies. Water, garbage bags, gloves... “please take what you need. East Nashville strong,” Blanchard wrote.

People from other states could be seen helping in the cleanup effort. Even a man whose house burned down, according to Blanchard, was on the scene to assist with damages.

Another tweet showed a local barbecue restaurant serving free food to any local resident in need of a hot meal, while another group of people showed up to hand out snacks and water.

The twisters that struck in the hours after midnight shredded more than 140 buildings and buried people in piles of rubble and wrecked basements. The storms moved so quickly that many people in their path could not flee to safer areas.

One twister wrecked homes and businesses across a 10-mile stretch of Nashville that included parts of downtown. It smashed more than three dozen buildings, including destroying the tower and stained glass of a historic church.

In the face of all that destruction, it was clear from Blanchard’s tweets that nothing could stop the community from rallying together to help each other.