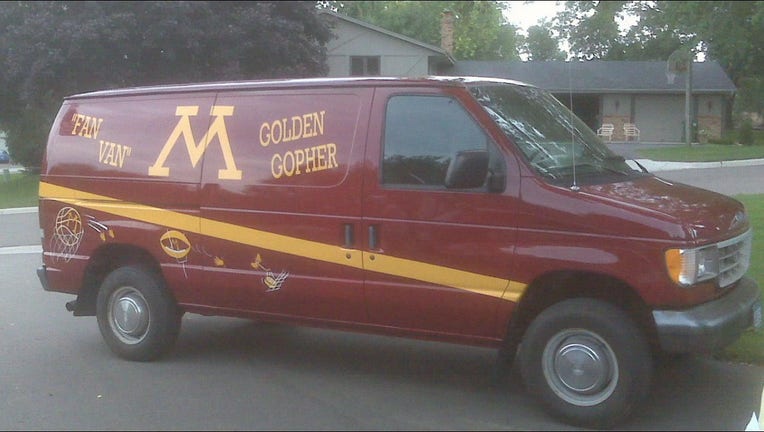 Be on the lookout for the Gophers fan van.

MINNEAPOLIS (FOX 9) - Homecoming is underway at the University of Minnesota, but a well-known tailgating van might be a no-show this weekend.

The "fan van," a 1995 Ford Econoline van that has been a fixture at Gopher games for years, was stolen out of Dinkytown over the weekend.

The "fan van", a 1995 Ford Econoline van that has been a fixture at Gopher games for years, was stolen out of Dinkytown over the weekend.

The Gopher fan van was parked alongside Slipka’s business in Dinkytown Saturday night. Security video captured two young men breaking in and driving off. The fan van disappeared along with a substantial part of its mission.

"The whole point of it was to bring people together and have it be a force for good as far as the community goes," explained Slipka.

The fan van wasn’t just a tailgating machine, it was a driving platform for the Slipka Foundation’s outreach to kids and education.

"The Gopher Fan Van is definitely connected to the mission, the Slipka Foundation,' Slipka adds. "I mean, our three-pronged approach is education, character building, and community building."

It’s a mission that Slipka says his foundation has supported for years, especially among urban youth. It’s part of the reason why he hopes someone sees the van and calls the police.

"You know, I see this as an opportunity for us to be a force for good," Slipka said.