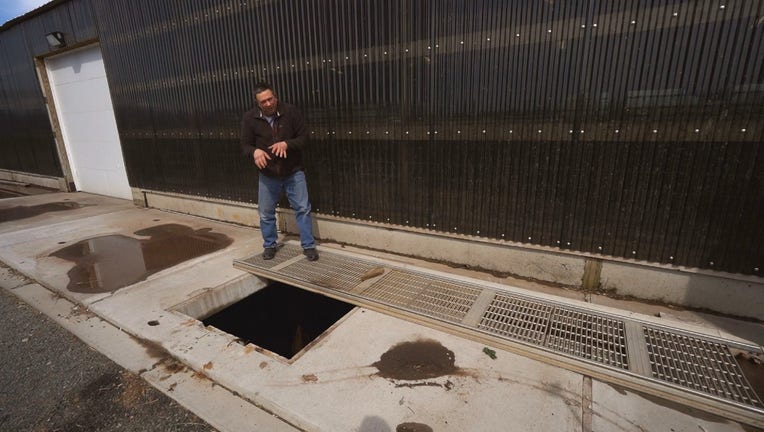 A farmer was saved after he fell into a manure pit in Osceola, Wisconsin.

OSCEOLA, Wis. (FOX 9) - For around 45 minutes Troy Derosier of Crystal Ball Farms in Osceola, Wisconsin was trapped in more than nine feet of cow manure in the 12-foot deep pit underneath his dairy cow barn.

On March 20, Derosier had a hatch to his dairy farm’s manure pit opened so he could use heavy farm equipment to churn up and pump out months’ worth of manure from his 200 cows.

A Wisconsin dairy farmer found himself in over his head when he fell into the manure pit. Luckily, a teen working on the farm heard his calls for help.

He had placed a board across the back of the opening to the pit so he could move around more easily - but the board snapped and Derosier fell in. The power from the manure pump shot him 40 feet, under a pool of manure.

"It’s basically a river of manure that’s still blasting at you," Derosier said. "I was totally submerged the whole 40 feet; I was trying to figure out where was up."

He was under the liquid, disoriented until he found a support column to hang on to.

"I spit the manure out of my mouth and I was able to breathe," Derosier said. "It’s desperation. You need something to save your life, you just do whatever."

Derosier was becoming exhausted fighting against the current of the pump and was shivering in the cold liquid on a cool March afternoon.

"The gasses that are extremely lethal in manure pits," Derosier said. "I just thought there’s no way anybody is going to find me."

After more than 30 minutes in the pit, Osceola High School Senior Alex Williams, who milks cows on the farm, heard Derosier’s calls for help.

Once he realized what was happening, he ran to get Derosier’s son, Jordan, to help.

"He called me and said ‘get a ladder your dad fell in the pit, hurry," Jordan Derosier said.

He and Williams got a ladder to the opening of the pit. Wet, cold and exhausted, Derosier worked to swim to the ladder, eventually pulling himself out of the pit -about 45 minutes after he had fallen in.

"When I look back now I see there’s a lot of little miracles that happened to make it so I’m alive and I’m very thankful," Derosier said.

Derosier credits a good ventilation system in his barn and his ability to stay calm as reasons why he made it out of the pit alive.

"We don’t know why he’s still here, but thank God he is," Jordan Derosier said.

After many showers, some hot chocolate and a trip to the doctor, Derosier says his body was tired from the struggle, but there are no signs of long-term health impacts.

It was the kind of accident Crystal Ball Farms didn’t see coming, but thanks to quick thinking and having someone in the right place at the right time, Derosier is looking forward to a long future in farming.

"I noticed the grass is a little greener, the trees are a little prettier. I appreciate things a little more, I think," he said.