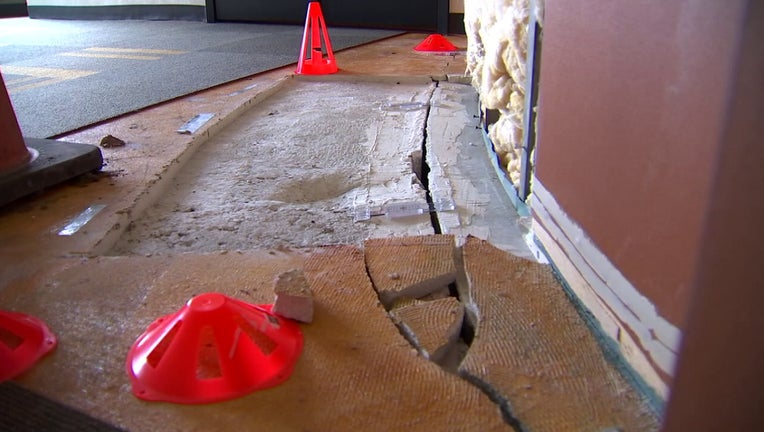 Damage inside the Calhoun Isles condos in Minneapolis.

MINNEAPOLIS (FOX 9) - Southwest Light Rail's ballooning budget and delays have turned heads and led to bipartisan calls for more oversight, but perhaps nowhere is the project more closely watched than at the Calhoun Isles condominiums in southwest Minneapolis.

From their units in the tower, condo owners can see the partially built, half-mile Kenilworth tunnel feet from their building.

Southwest Light Rail's ballooning budget and delays have turned heads and led to bipartisan calls for more oversight, but perhaps nowhere is the project more closely watched than at the Calhoun Isles condominiums in southwest Minneapolis.

Construction has fallen silent since Jan. 27, when residents noticed cracks appearing on floors three through 10 of the condo tower and scrambled to alert project officials. Then, on Sunday morning, condo owners woke up to neighbors pounding on their doors to tell them the basement parking garage was flooding. A water line serving the light rail construction site had failed.

"It seems to be one continuous problem," Jim Nikora, who owns a unit in the Calhoun Isles, said while showing FOX 9 the damage. "They come at you so fast."

Even before the latest delay, Met Council estimated that the Green Line Extension was at least $700 million over budget and four years behind schedule. It is now projected to open in 2027. Minnesota lawmakers have filed multiple bills to provide more scrutiny of construction along the 14.5-mile line from Minneapolis to Eden Prairie.

There is no timeline to restart construction in the tunnel. Met Council, which oversees the work, has hired the Chicago-based forensic engineering firm Socotec to investigate the cause of the cracks, condo owners said. Two separate engineers have deemed the building safe for residents.

Tuesday, a spokeswoman for the council did not provide the contract with Socotec. The council's appointed members have not discussed the cracking issue at any public meetings.

Condo owners have warned of cracks

Condo owners have long warned about cracks after Met Council chose a route within feet of their units. The Calhoun Isles buildings are former silos built in 1915, then converted to condos in the early 1980s. In 2015, construction of a nearby apartment building caused $30,000 in damage to Calhoun Isles, the condo association has said.

The route through the Kenilworth Corridor necessitated a half-mile tunnel because there isn't room for freight trains and light rail to run side by side. When the Green Line Extension opens, light rail trains will run in the tunnel with freight traffic at ground level.

Met Council has made a series of costly and time-consuming changes to the tunnel construction to mitigate cracking concerns. Project managers recently said the tunnel was nearly three years behind schedule.

Minnesota lawmakers are poised to pass legislation triggering an audit of Southwest Light Rail's design, construction and oversight this session. Bills has passed committees in the House and Senate and have received backing from all legislative leaders and Gov. Tim Walz.

State Sen. Scott Dibble, DFL-Minneapolis, has also introduced a bill to transfer control of the project to the state Department of Transportation.

"What is it about the Met Council that causes that agency to close its eyes to really important considerations?" Dibble said at a legislative hearing last week. "They were told time and time again that these (condo) towers were unique and highly susceptible to disturbance."

Sunday's parking garage flood only added to the unsettling feeling around the building, residents said.

Vanne Owens Hayes, the condo association president, said she was among those who scrambled to move their cars out of harm's way at 7 a.m.

"It sounded like Minnehaha Falls," she said. "I stood at the end of the ramp and looked over. The sound you heard, you swore you were at Minnehaha Falls because it was coming so fast."

A Met Council spokeswoman confirmed that tunnel construction was still stopped when the water line broke. The Council, the City of Minneapolis and project contractors will investigate the water line's failure, she said.