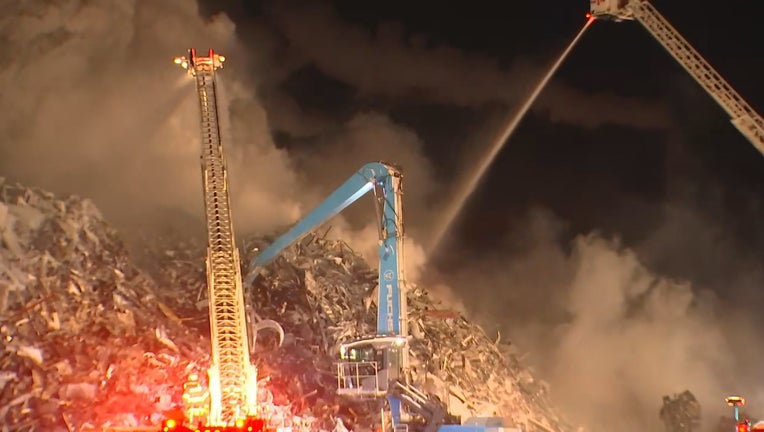 BECKER, Minn. (FOX 9) - Four days after flames broke out, the fire at the Northern Metals facility in Becker, Minnesota is still burning and officials say it could still another couple of days before every flame is extinguished.

Friday, firefighters said the fire had been mostly knocked down but was still burning in spots. Police said that air quality tests have come back and shown no threat to residents.

Early air quality test results from the Minnesota Pollution Control Agency do not show signs of dangerous levels of chemicals following the massive fire at Northern Metals in Becker, Minnesota, according to the latest update from the Becker Police Department.

The recycling facility is a fairly new addition to the Becker community, but it’s been a long process for Northern Metals to get to their current home and it wasn’t without controversy.

The fire that has burned for days in Becker had settled down on Friday, as one of the state lawmakers representing the city worked to calm fears.

"It was nothing to do with operational, they have not started the shredding whatsoever," said Rep. Shane Mekeland. "This is state-of-the-art, there is nothing like it in the world."

The recycling facility that scraps metal from cars was forced to stop shredding in north Minneapolis after a settlement in 2017 with MPCA over air pollution. That meant Northern Metals had to relocate those operations, and they had their sights set on Becker.

Records show the same day as the settlement, Northern Metals reached a purchase agreement with Xcel Energy to buy some land owned by the power company in Becker.

"This is a big industrial park and does have very close access to a lot of Highway 10 and the rail, and then they’ll be dependent on the rail to move the shredded product to the foundries,” said Mekeland.

In order for their business to set up shop in town, they needed permit approval from the city, county, state, and MCPA -- after multiple council and public meetings, open houses and even assurance in 2018 from the chief operating officer that the facility was safe.

"Being a resident of Becker and having family living here, air quality and making sure everything is done correct is very important to me," said COO Scott Helberg in that statement.

The permits were approved, including by the MPCA following its environmental review process, despite some concerns from the public.

While building of the facility got underway in 2019, plans were for it to open soon. However, it wasn’t fully operational by the time of Tuesday’s fire.

The company said in a statement when the location does eventually officially open, it will be a fully-enclosed shredding facility and will employ 85 Minnesotans.