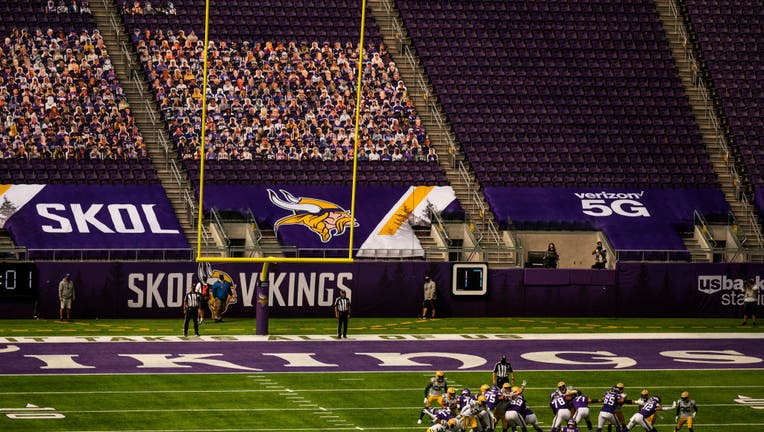 MINNEAPOLIS, MN - SEPTEMBER 13: Dan Bailey #5 of the Minnesota Vikings kicks a field goal in the second quarter of the game against the Green Bay Packers at U.S. Bank Stadium on September 13, 2020 in Minneapolis, Minnesota. Cardboard cutouts sit in s (Stephen Maturen/Getty Images)

MINNEAPOLIS (FOX 9) - No fans will be in attendance at the next Minnesota Vikings home game on Oct. 18.

The Vikings announced Tuesday they will not be in a position to host fans at U.S. Bank Stadium when they play the Atlanta Falcons given the state’s COVID-19 infection rates and Minnesota Department of Health guidance limiting indoor venue capacity to 250 people as well as for the health and safety of fans, the team and the community.

The Vikings will be without fans in the stands Oct. 18 and the Packers also announced an indefinite closure of its doors to spectators this season during the COVID-19 pandemic.

When Vikings announced in August they would play their first two home games without fans, the team said they were hoping to have fans in attendance at some point during the season.

READ NEXT: What the Vikings are saying about playing without fans at U.S. Bank Stadium

The team said there will be up to 250 family members of Vikings personnel at the game against the Falcons to “further test our game day protocols," much like they had at the Week 3 game against the Tennessee Titans.

When asked Monday about the possibility of having fans at U.S. Bank Stadium for the Vikings game against the Falcons, head coach Mike Zimer said, "I have no idea. I guess that's up to the Governor."

Fans, businesses looking for normal amidst most abnormal Vikings game day in Minneapolis

The Vikings played in front of about 2,500 fans in their Week 2 loss at Indianapolis, and played in front of a little more than 13,000 last Sunday at Houston. The Cincinnati Bengals announced Tuesday morning that in accordance with Ohio guidelines, they'll be allowed to have up to 12,000 fans at their six remaining home games.

The Vikings are continuing to work with state and city officials to host a limited number of fans at U.S. Bank Stadium later this season.