Four months after Adam Johnson’s decapitated body parts were found placed in locations across Minneapolis, the mother of his son says more work needs to be done to solve his murder.

(FOX 9) - As leaves continue to change their colors, JoJo - who requested to be identified as such to protect her privacy and safety - is still no closer to knowing who is responsible for the gruesome murder and dismemberment of her former boyfriend and why they did it.

The dismembered body parts of 36-year-old Adam Johnson were found in four separate locations across Minneapolis from mid-June to early July.

"I don't have words and I don't want to think about it...he was a human being," said JoJo, who shared a son with Johnson. "I've literally played every scenario in my head."

The FBI is now assisting the Minneapolis Police Department with their investigation. No arrests have been made, and a person of interest has not been publicly identified. 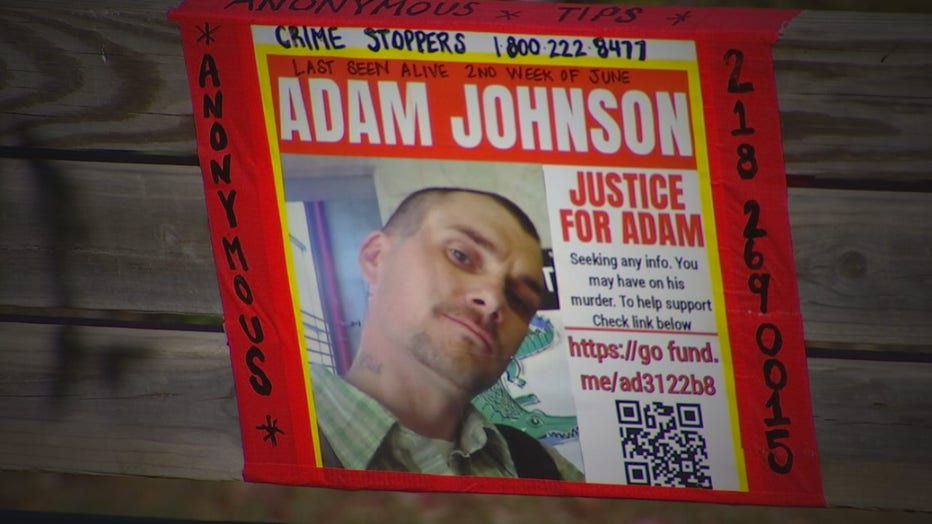 Months after his dismembered body was found in Minneapolis, family is still looking for answers in Adam Johnson's death.

In the four months since his murder, JoJo has learned some new information from investigators. She says the FBI found DNA under his fingernails that is being tested, and although Johnson struggled with addiction, a toxicology report revealed he was sober when he was killed.

But this very public crime was apparently not caught on camera. The surveillance camera at the Ukranian Cultural Center, where Johnson's body parts were initially found, was not working.

Perhaps most disturbing, JoJo says a word was carved into one of Johnson's body parts. All of that, combined with more graphic details about the condition of his remains, leads her to believe this was not spontaneous violence.

"They knew what they were doing. They knew how to do it," said JoJo.

JoJo admits Adam could be obnoxious and thinks if he needed money or a place to stay, he could have bugged the wrong person. But, she doesn't want Johnson's name or his case to be forgotten and is speaking out now because she wants justice - both for Adam and for his two sons.

"I drive myself crazy thinking about what happened to him and how it happened, but that's something that I have to think about because this is our reality," said JoJo.

Meanwhile, Adam's family has been working with a private investigator.

Crime Stoppers of Minnesota is offering a $1,000 reward for anyone with information that could lead to an arrest. His family is also offering a $2,500 reward.

A GoFundMe has been set up for the family.