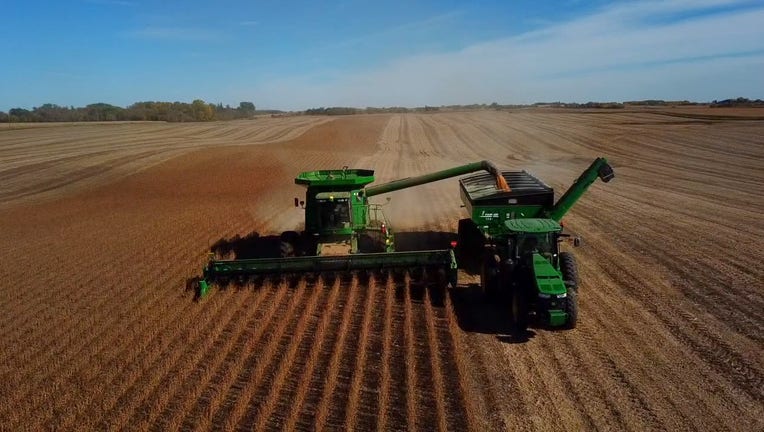 (FOX 9) - Making a living off the land has been in Angela Dawson's family for four generations.

"What I like about farming is the richness and cultural practices it represents," Dawson said. "I have a desire to change the narrative in this country from that old story - land as punishment and the worst work in the world, forced servitude to a more empowered relationship with the land."

New bill aims to help even the field for Black farmers

A new bill is aimed at creating more equity in the farming industry by helping ease obstacles around getting loans and more.

But when she went to start her own farm a couple of years ago, she was turned down for a $50,000 loan by the USDA because, among other reasons, she had missed a student loan payment 10 years ago.

"It's an understatement to say I was disappointed. It was a trying time. I was putting out a lot of my own money. I was really counting on that office to help close the gap and that failure changed my life."

Eventually, Dawson started 40 Acre Co-op in northern Minnesota, the first national co-op for Black farmers in the country, after she heard similar stories about the obstacles faced by other farmers of color. Now, there's a new effort to remove some of the barriers preventing BIPOC farmers from owning and cultivating their own land.

"Farmers of color struggle to get a foothold and get access to land and financing to make a go of it," said Minnesota Senator Tina Smith.

Sen. Smith is one of several sponsors of the Justice for Black Farmers Act, along with lead sponsor Sen. Cory Booker, that was reintroduced in the Senate earlier this month. The bill would create a new agency within the USDA to buy land and grant up to 160 acres at no charge to African Americans who are interested in starting their own farms.

It would also form a Farm Conservation Corps where young adults from socially disadvantaged groups could learn skills to pursue careers in farming and ranching, and create a new federal bank to make it easier for Black farmers to get loans.

"There's a huge opportunity to build wealth, to create opportunity for your family that is not available to Black farmers and other farmers of color in this country, and part of the reason for that is some systemic inequities in the U.S. Department of Agriculture that need to be addressed," Sen. Smith said.

To that end, the bill would also create an independent civil rights oversight board to investigate reports of discrimination at the USDA. It would also give half a billion dollars a year to historically Black colleges and universities to start expanding courses focused on agriculture.

"At the end of the Civil War, newly freed African Americans were promised 40 acres and a mule, and that promise was never delivered. To me, it is a repairing of that, is a repair of that betrayal that we would be able to accomplish if were able to pass this bill," Sen. Smith said.

There were nearly a million Black farmers in the U.S. in 1920, but a century later, there are fewer than 50,000. Here in Minnesota, the numbers are even more striking. Out of more than 68,000 farmers in the state, only 39 are African Americans.

Assistant Commissioner Patrice Bailey at the Minnesota Department of Agriculture says increasing the amount of land owned by Black farmers across the country sevenfold over the next decade would be a step in the right direction. But, if the bill passes, how the resources are distributed would determine if it would actually help Black farmers in Minnesota.

"160 acres is quite a bit of land, but it doesn't put a dent in the thousands and thousands of acres that other white farmers currently have. But, I think it does open the door. It opens the door for people to be able to walk through who are thinking of ways to entry," Bailey said. "I'm hopeful. I'm excited to be able to continue to share with emerging farmers just starting out that this act there are people talking about it on the national level."

Dawson said she is grateful the Justice for Black Farmers Act is shining a light on farmers of color, but she says it's time to level the farm field so more BIPOC farmers can put down roots in Minnesota.

"I think it's time for this conversation. I'm thankful it took this bill to do it, but I think we have a lot of work to do about building equity for Black farmers, particularly here in Minnesota," she said.