Minnesota investigators are seeing a search in new tips after Netflix highlighted the case of Josh Guimond, ahead of the 20th year anniversary of his disappearance.

The episode was released on Tuesday, Oct. 25, roughly two weeks before the 20th anniversary of Guimond’s disappearance. The episode takes a deep dive into theories about what happened to him, along with interviews with close friends, family members and investigators working on the case.

"Our hope is attention will be brought to this case to generate tips or information that is needed to solve this case," lead investigator Lt. Zach Sorenson with the Stearns County Sheriff's Office, told FOX 9 on Oct. 27.

The popular Netflix series "Unsolved Mysteries" recently released an episode on the case of Josh Guimond, a Minnesota college student who disappeared from St. Johns University decades ago.

On Nov. 9, 2002, Guimond was last seen at a small party with friends at a dorm on campus at St. Johns University in Stearns County. People at the party noted Guimond had gotten up and left without saying anything. It was the last time anyone saw him.

The 20-year-old entered his apartment for the last time at 11:06 p.m. and didn’t have his wallet, glasses or car keys when he went to the party. Friends realized something was amiss after Guimond failed to show up for a mock trial debate the following afternoon.

Law enforcement searched all over campus and brought in dogs to assist in the search. The National Guard was called to help search the campus's terrain. The FBI assisted in the investigation as several college men were missing in Minnesota and Wisconsin around the same time.

The episode explored several theories about why Guimond essentially vanished into thin air. A few included how investigators thought the college student may have drowned in Stumpf Lake on campus, but his body was never discovered, despite several searches.

Law enforcement investigated whether his disappearance could be linked to other college students in Minnesota and Wisconsin who died or went missing around the same time, but they determined it wasn't connected. They also considered whether a potential serial killer was working up and down the Mississippi River or if someone was killing male college students who seemed to have mysteriously drowned after a night out with friends.

Another theory was since Guimond was chatting with men online, perhaps he went to meet up with someone the night he went missing. Investigators hinted it could explain why he didn't tell anyone at the party where he was going. Investigators explained they found his personal Yahoo account on the computer in his bedroom at college, which led to this theory.

"The examination of Joshua’s computer leads me to believe he might have had some secrets he didn’t want to share with people," Vic Weiss, a lieutenant with the Stearns County Sheriff’s Office, said in the Netflix episode.

Vic added someone had used an internet washing program within days after Guimond's disappearance. The episode explained his room was never closed off as a crime scene, and anyone in the apartment could have accessed the computer.

Recent developments in the search for Josh Guimond 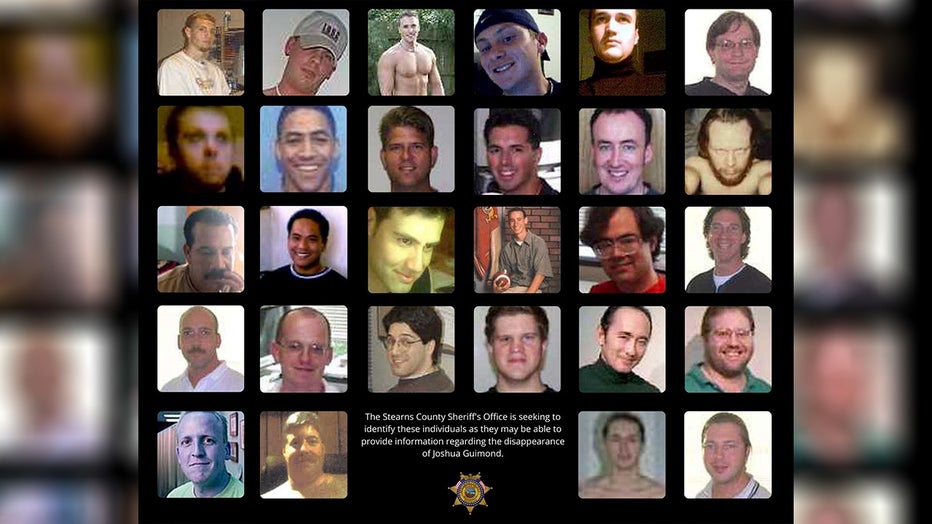 The Stearns County Sheriff’s Office released a statement on Saturday requesting the public’s help identifying 28 men found in pictures on Guimond’s computer to see if they have any information or connection to his disappearance.

Lt. Sorenson told FOX 9 they have received several new tips since their announcement and the airing of Netflix's episode. The sheriff's office is following up on those tips.

"Our thoughts are with Joshua Guimond’s family, friends, the St. Johns and St. Bens family, and the community. The Stearns County Sheriff’s Office is committed to obtaining answers regarding the disappearance of Joshua Guimond. It is our belief that directly engaging the community in this effort is key," said Sorenson.

The investigator added "someone knows something," and if you have any information on the disappearance of Guimond, or recognize any of the men in the photographs, call 320-259-3700 or submit a tip here.

For more information on the episode of Guimond's disappearance and other episodes from Volume 3 of "Unsolved Mysteries," visit their website here.