High gas prices have some Minnesota families thinking about alternative ways to get around.

MINNEAPOLIS (FOX 9) - High gas prices have some Minnesota families thinking about alternative ways to get around. Bicycle shops told FOX 9 that more people are bringing in their bikes for repairs while they're also seeing an increase in sales on certain items.

"There's no question that the price of gas is something a lot of us are concerned about," said Luke Breen, owner of Perennial Cycle.

When customers come into Perennial Cycle, some looking to avoid pain at the pump are trading four wheels for two – at least for smaller outings.

"We sell a lot electric cargo bikes, which are for young families, for carrying the kids around, for getting groceries, taking the kids to school to the playground, and I regularly hear from the customer has that they feel like every mile they're putting on our cargo bike is one less mile in their car," Breen said.

The bike shop in Uptown began seeing an increase in sales in April, but Breen started preparing for it in the winter. He ordered more bikes than usual in preparation of the gas price hike and also because of supply chain issues.

He also said during the pandemic, there became an increased awareness of the importance of reducing one’s carbon footprint. And with the current high gas prices, there's now a financial incentive to do it, as well. 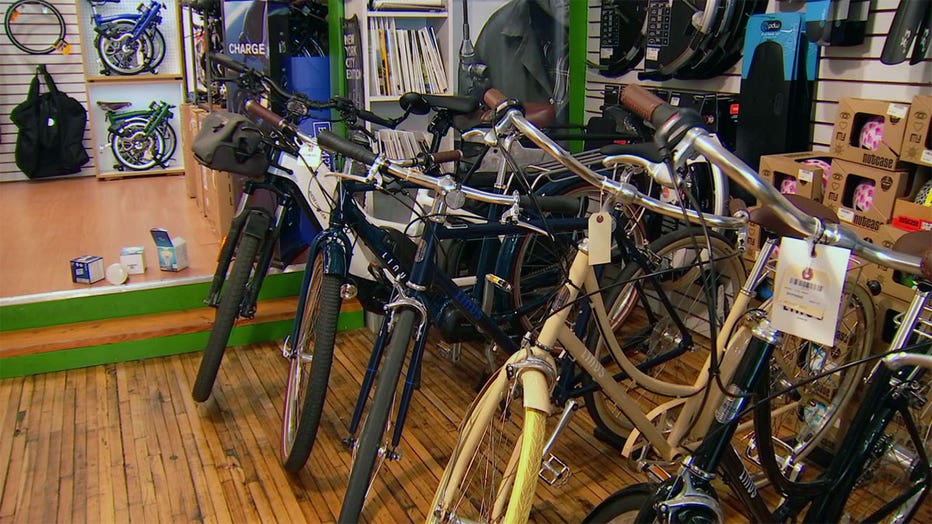 As gas prices hit new highs, some people are increasing their biking to save gas. (FOX 9)

"It was coming up a lot. People were coming in that hadn't been considering a bike, but all of a sudden they were considering a bike," he said. "We have many families that have purchased bikes this year trying to put off buying a second car."

Farmstead Bike Shop near 40th and Bryant isn't selling more bikes now than at the heart of the pandemic, but employees are booking service requests almost a month out now.

"We get a lot of people talking about, ‘I haven't ridden this bike in 5, 10 years,’ ‘it's been in my garage,’ or ‘my dad gave me this bike that's been in his garage for 10 years,’" said Farmstead Bike Shop sales manager Cole Barton.

Barton said he himself doesn't own a car.

Both bike shops told Fox 9 they're seeing evidence of customers following in Barton’s lead, as they spend money on bike attachments that make it easier to commute.

"There's no question there has been an uptick in baskets, racks and bags – all things that make your bike a little more utilitarian," Breen said.

"We're putting racks or kickstands or baskets on a lot of the commuter-type bikes. There's definitely an interest in people doing more their everyday errands by bicycle," Barton said.