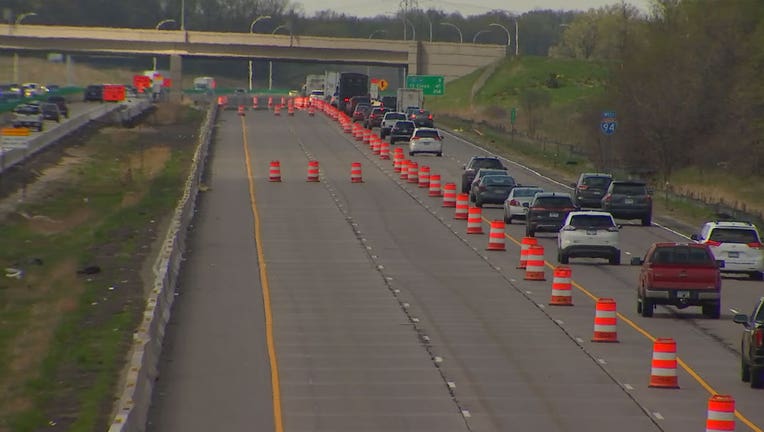 It's orange cone season on I-94 northwest of the Twin Cities as a stretch of interstate is set for major construction this summer.

MAPLE GROVE, Minn. (FOX 9) - As the weather gets warmer and people start to head to the lakes, the Minnesota Department of Transportation is urging people to expect delays and plan ahead because of construction.

For some drivers, they are already feeling the impact of the road work.

Interstate 94 between Maple Grove and Clearwater set for summertime construction

Interstate 94 between Maple Grove and Clearwater is set for summertime construction, so plan accordingly.

"I think it normally takes about two hours to get here from where I’m coming from and it probably took another 45 minutes," said Rylee Bloom, who is traveling westbound on I-94 from Wisconsin. "I would tell drivers to add at least a half-hour extra time."

He’s not alone with his traffic woes. Residents are concerned with how construction will impact summer travel as people head to the lake.

"Just trying to get out of town and plus when you live there it’s hard to do anything in your community when traffic is as bad as it is," said Amanda Pickens.  "A lot of people do travel, I understand that, but I think they do too much construction at once. They should pick what they’re doing one at a time."

According to MnDOT, I-94 between Maple Grove and Clearwater is undergoing three improvements and upgrades along 39 miles of road.

Once complete, there will be three lanes on a majority of the highway and a smoother road surface for the more than 125,000 cars that travel along this stretch of I-94 each day.

"We’re into the third year of this project," said David Aeikens, a public affairs coordinator for MnDOT. "We did the eastbound side last year and this year we’re doing the westbound side.’

He warns drivers if they’re not paying attention to the split in the highway, the trip could take even longer.

"If they’re trying to exit at Weaver Lake Parkway or Maple Grove Parkway in Rogers, they’re going to have to get into one of those two right lanes. If they get into the left lane, which is the eastbound side, then they’ll be able to shoot straight through and bypass all of the exits," said Aeikens. "There won’t be an opportunity to exit until you get to St. Michael."

Drivers can expect the construction project to end on Nov. 1.

Aeikens said roadwork will not take place on holidays such as Memorial Day, Independence Day, and even the fishing opener.