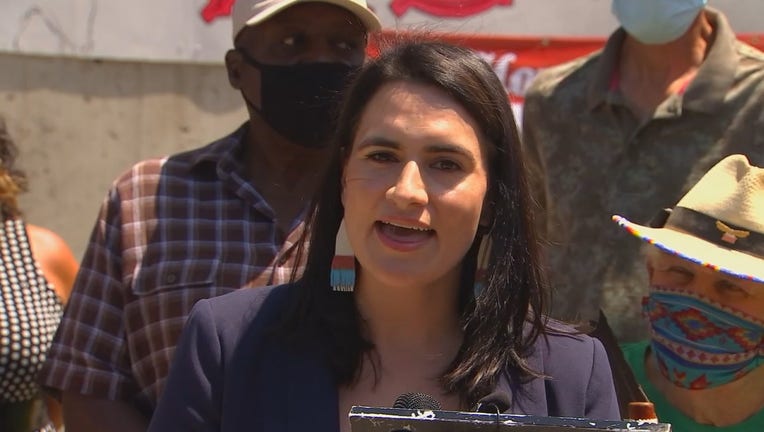 MINNEAPOLIS (FOX 9) - The indigenous community celebrated a major victory Monday at the American Indian Center in Minneapolis after Washington, D.C.’s professional football club said it will replace its racist nickname and logo.

While the decision was made hundreds of miles away, Lt. Gov. Peggy Flanagan and other Minnesotans celebrated in Minneapolis.

Starting in 1992, Minnesotans have been protesting Washington's racist nickname and logo. Now, the team has caved to pressure and will change both.

“Today is a really good day,” said Flanagan. “As it’s said, it’s a good day to be indigenous.”

Among the group joining Flanagan was Tyrone Terrell, of the African American leadership council.

“I can remember 1992. We almost froze to death outside the Metrodome fighting this battle, but, to be honest, I never thought I would see this day.”

The push for Washington to drop its name and logo began in the 1980s. Outside the Metrodome, at the 1992 Super Bowl, was the first major protest against them.

Now, with the momentum of racial justice in the wake of George Floyd’s death, the fight came full circle in Minneapolis.

“Well, I think things are going to start moving now, fast,” said Clyde Bellecourt, of the American Indian Movement. “We got to make sure they move fast.”

Bellecourt has been a part of the movement for half a century and has united many.

“It is hard to look at Clyde [Bellecourt] and his vision and not tear up knowing he had the courage and the strength to bring us together to stand up and right this great wrong,” said Spike Moss, a local civil rights activist.

When Nike removed all Washington team apparel from its website and then Fed-Ex threatened to end its stadium naming rights, other corporations lined up too. The money talked and owner Dan Snyder, who said he’s never change the name, caved to the pressure.

“And so, with the movement we find now, this first step of many, as Uncle Clyde mentioned, there are many more teams that we have left to go,” said Flanagan.

For years, the Washington team has really been the marquee in this fight, the top of the list, but far from being the only one on the list. Other pro teams have made some concessions, but they’re fully in the sights of activists to continue making changes. And there’s so many more.

The National Coalition Against Racism in Sports and Media has pushed 3,000 name changes over three decades, but they say there are thousands still out there.

“We’re working on an issue right now in Savannah, Missouri, where the high school out there is called, I’ll give you a scoop, they’re called the Savages,” said David Glass, of NCARSM.

Monday marked a major victory, but the fight is far from over.

“I really hope they take this opportunity to leave indigenous tradition and cultures and imagery out of sports. I think that’s really important as we move forward,” said Rebecca Crooks-Stratton.