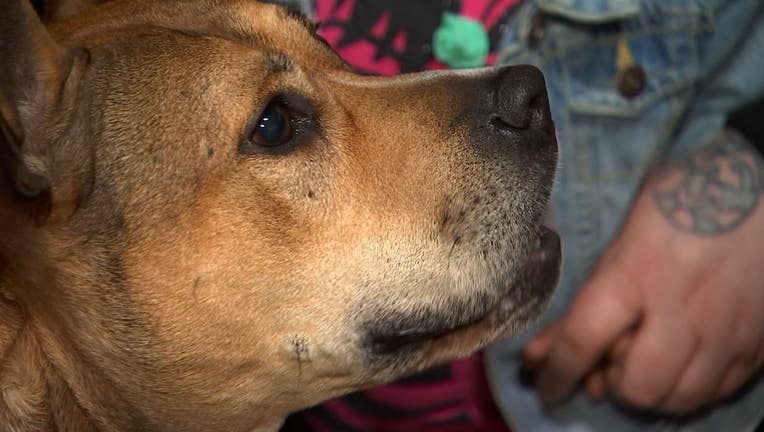 Monica Mathis and her dog Hazel have reunited after three years apart.

ST. PAUL, Minn. (FOX 9) - A local family lost their dog nearly three years ago, but now they are together once again all thanks to a beer can campaign from a Florida brewery.

Monica Mathis and her dog Hazel are getting to know each other again.

A local family lost their dog nearly three years ago, but now they are together once again all thanks to a beer can campaign from a Florida brewery.

"I had butterflies in my stomach,” said Mathis. “I was feeling a little nauseous. I was really worked up. This is the best gift ever."

The two were reunited after a cross country road trip brought them face-to-face for the first time in three years.

"She was just kissing and jumping all over us,” said Mathis. “Loving on us. She was just super happy. I think she is tuckered out from it all."

Mathis lost Hazel while she was living in Iowa, but while scrolling through Facebook recently she spotted a familiar face on the side of a beer can, which was part a promotion to showcase adoptable pets at a Florida animal shelter.

"After time went by I didn't feel like I was ever going to see her again,” said Mathis. “Had I not seen the advertisement on Facebook or the little cans with her face on them, I don't think I ever would."

A worker at Manatee County Animal Services drove for nearly three days to bring Hazel and Mathis - who now lives in Minnesota - back together again.

"We had a great time,” said Hans Wohlgefahrt, Manatee County Animal Services. “She's very affectionate. We bonded a little bit over the trip, even before we left for the trip. I'm more than just professionally invested in this. I felt this was the right thing to do, to bring her back to her family no matter how far."

Mathis says Hazel is a little chunkier than before, but otherwise she seems no different. Mathis is grateful the final member of her family is finally back home, hopefully for good.

"For me, it’s just felt like I've won the lottery,” she said. “My family is just so happy to have her back. It’s just an amazing, amazing feeling."

Hazel will spend the next few days getting reacquainted with Mathis, her husband and their eight kids. Mathis hopes to eventually get Hazel certified to visit hospitals as a therapy dog.