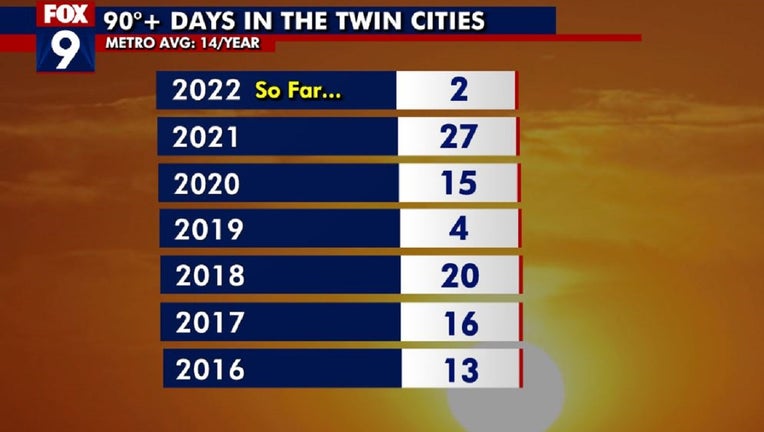 The number of days the Twin Cities hit 90 degrees in recent years. (FOX 9)

(FOX 9) - Our wonderfully comfortable temperatures are about to be a thing of the past as the more "typical" summer heat and humidity will be arriving gradually over the next few days.

High temperatures in the 70s this time of year are perfectly seasonable. However, our low humidity is not. For the first week of June this year, dew points have been hovering in the 40s and 50s, with even some 30s appearing for a few afternoons. While not unheard of, getting such a long stretch of low humidity this time of year is unusual. Combine those low dew points with temperatures in the 60s and 70s, and it's been about the most pleasant start to June we have seen in a very long time.

Much of the central U.S. has spent the first week or so of June below average. Check it out in the image below when comparing temps to the weekly average: 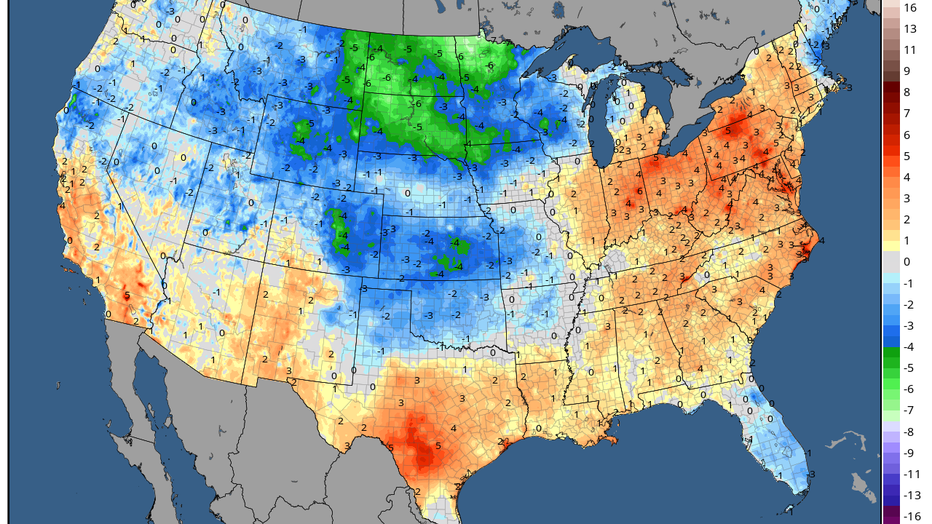 Much of the central U.S. has spent the first week or so of June below average.  (FOX 9)

Well, now the temperatures will be creeping up, and so will the dew points. Check out where dew points are headed through the weekend and into next week:

This GIF comes from a computer model, so it's not likely to be perfect, but certainly can give you an idea of where we are headed. With 30s and 40s through Friday, it's likely to continue to be pleasant. But the next wave rolls through Saturday, which will bring deeper moisture and likely allow dew points to flirt with 60 degrees or so which gets us back up into the humid category.

By next week though, a surge of southerly breezes will pump in deep Gulf of Mexico moisture, which could push dew points close to 70 degrees, which is a tropical-style air mass.

RELATED: Twin Cities heading toward the most common temps of the year: the 80s!

Not only will the humidity return, but so will the warmer temperatures. Over the last 10 days, we've seen highs generally in the 70s, but the 80s are likely to return and then hang around for pretty much the rest of the summer as we open the door to the warmest time of the year on average, which occurs from mid-June through late July.

Here is a loop of forecasted temperatures when comparing them to the average over the next couple of weeks:

This loop is pretty intuitive with the green and blue colors representing below-average temps for that time period, and it's the opposite for the orange and red colors. The heat wave building in the desert southwest eventually surges northeastward into the Plains and Midwest but then dissipates briefly. All that before the heat quickly returns with persistent well above-average temps more likely for several days in the second half of the GIF. Also notice that toward the end of the loop, the orange colors sort of "settle" into the eastern and southeastern U.S. This almost circular region of above-average temps is a classic indicator of a strong and stagnant ridge of high pressure where sunshine and heat remain supreme. But the periphery of that zone from the western Plains to the Great Lakes to the Northeast is near average, or even slightly cooler than average. That's because this is where rounds of thunderstorms are typically located as they develop and circulate around the high. This is called the "ring of fire" as the scattered storms erupt on the outside edge, or ring of that strong, hot high pressure.

Just keep in mind this is not set in stone but shows a higher probability of our temps heading in that direction.

Thursday's forecast: Mostly sunny with more highs in the 70s

The weekend could see some isolated rain, but it will be mostly sunny and very pleasant.