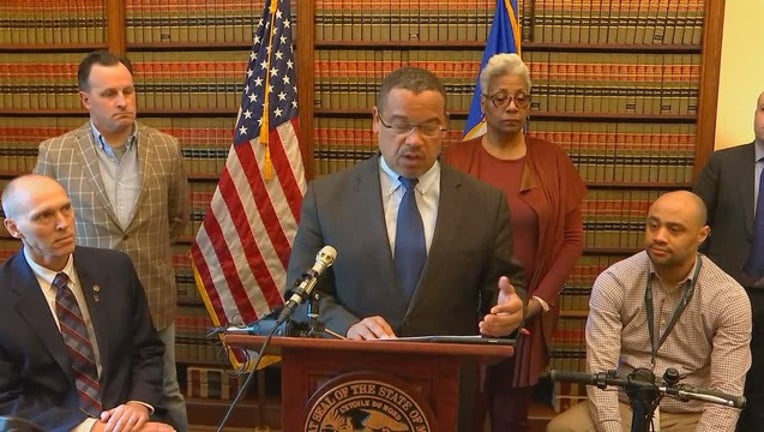 Attorney General Keith Ellison announcing he asked the state to add eight members of the Sackler family, that owns Purdue Pharma, to the State's lawsuit against the company

ST. PAUL, Minn. (FOX 9) - Minnesota Attorney General Keith Ellison announced Friday he has asked the State to add eight members of the Sackler family, which owns Purdue Pharma, as individual defendants to the State’s lawsuit against the company.

“They knew what they were doing, and they did it anyway," Ellison said in a statement. "Today, we’re holding them personally accountable for the harm they and their greed have done to the people of our state.

The state alleges Purdue Pharma minimized the dangers of their drugs, including OxyContin.

“The Sackler family controlled Purdue at all times," Elliosn said. "They were intimately involved in directing Purdue’s deceptive and fraudulent marketing tactics and driving strategies to sell more and more opioids, despite fully knowing the risks to Minnesotans. Their misconduct led directly to damage and death in every community in Minnesota.

Ellison says the eight members of the family knew as early as 1999 that their prescriptions drugs could lead to addiction and they continued to mislead the public about the risks of long-term use.

The State of Minnesota is seeking judgment against Purdue Pharma and the Sackler family for injunctive relief; damages and treble damages; monetary relief, which could include restitution for injured individuals and entities; disgorgement of profits; civil penalties; abatement of public nuisance; and the State’s costs, including attorney fees and expert costs.

The families of Drs. Mortimer and Raymond Sackler released the following statement:

“This baseless lawsuit is a misguided attempt to place blame where it does not belong for a complex public health crisis.  We strongly deny these allegations, which are inconsistent with the factual record, and will vigorously defend against them.

"Just this week, in North Dakota, a judge ruled that Purdue Pharma followed FDA guidelines and is not responsible for the opioid epidemic. "Holding Purdue solely responsible for the entire opioid epidemic in North Dakota is difficult to comprehend, especially given Purdue’s small share of the overall market for lawful opioids. It is also difficult to comprehend given the large market for unlawful opioids” (pg. 22, paragraph 58).

"Purdue Pharma manufactures an FDA-approved medicine that represents a tiny portion of opioid prescriptions while providing life-changing relief for millions of pain patients who need it.

"We have always acted properly and are committed to supporting solutions that save lives by preventing addiction and abuse of prescription medicines and treating those who are suffering from addiction.

"Solving this crisis will require collaboration and focus on the real problems our nation needs to address.  Government data makes clear that the opioid crisis is growing rapidly because of illicit fentanyl smuggled in from China and Mexico – and headline-seeking lawsuits like this only distract from the important task of identifying real solutions to that crisis.”