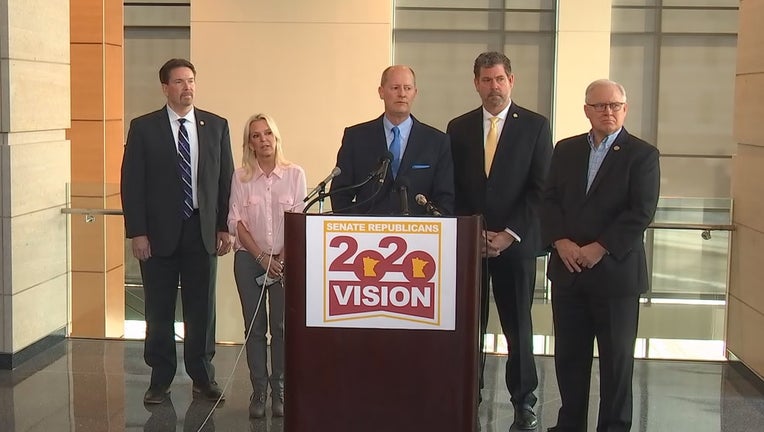 ST. PAUL, Minn. (FOX 9) - Minnesota Senate Republicans said a crime increase has made outstate Minnesotans fearful of coming to the Twin Cities and lawmakers needed to address the issue in the 2020 legislative session.

“You have near daily reports of gang violence spilling into the streets and public transit. I find that very alarming,” Senate Majority Leader Paul Gazelka told reporters at a news conference. “I am saying that crime is up and it’s not OK, so what are we going to do about it?”

Minnesota Republicans put an extra focus on crime in the 2020 Agenda.

The claim about a crime spike is only partially true, according to police and FBI data reviewed by FOX 9. Homicides in Minneapolis and St. Paul rose in 2019, but overall violent crime was lower than it has been in many recent years, the data indicate.

To address crime, Gazelka said Senate Republicans will consider legislation to stiffen penalties on felons who are caught with guns. He did not propose any other crime-related policies, and said his caucus would not seek to cut funding for cities that don’t hire additional police officers.

Democrats who control the House said the GOP was trying to stoke fear among Minnesotans.

“It’s unfortunate that the playbook from Donald Trump and the Washington, D.C. Republicans is demonize and divide,” House Speaker Melissa Hortman said in an interview. “I’m really disappointed to see Minnesota Republicans going down that same path.”

In Minneapolis, homicides rose in 2019 to 48, up from 33 the previous year, according to the Minneapolis Police Department’s online data.

St. Paul saw homicides double, to 30 from 15 in 2018, and reached a level not seen in at least the past decade, according to city and FBI data.

Lawmakers will convene the 2020 session on Feb. 11, with many eyeing their re-election bids later in the year.

Republicans who control the state Senate mostly represent suburban and rural districts. House Democrats largely represent districts in the Metro, including dozens of seats within the city limits of Minneapolis and St. Paul.

Senate Republicans have scheduled a public hearing in Hibbing for Jan. 21. Cracking down on felons who have guns will be discussed, said Gazelka, R-Nisswa.

“There’s a lot of talk about criminal justice reform. We have to put public safety first,” he said.

Hortman said the House Public Safety committee may look at the 2019 increase in Twin Cities homicides.

“The Legislature absolutely should look at those homicide rates and why is it that they’ve spiked in Minneapolis and St. Paul, and is there action we can take to address that,” said Hortman, DFL-Brooklyn Park.

Gazelka downplayed earlier talk of taking away funding from cities that don’t appear to have a handle on crime, telling reporters “we haven’t talked about that at all.” Senate Republicans want to work with cities to see how they can hire additional police officers, he said.

The GOP leader also said his caucus would not vote to legalize recreational marijuana.

“There’s nothing good that would come out of it,” he said.