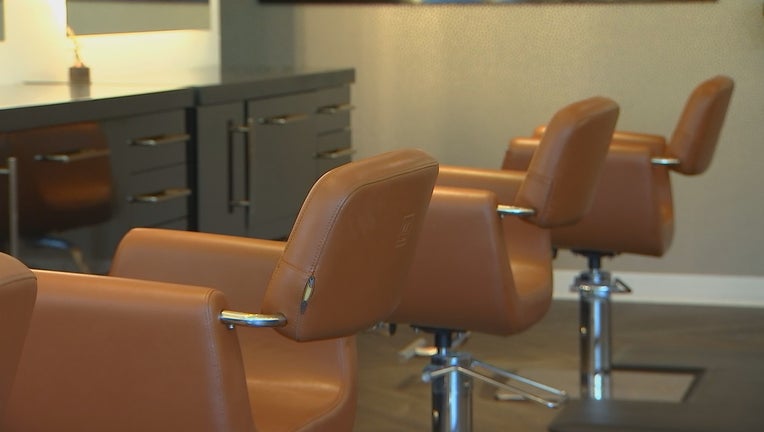 (FOX 9) - Nearly two months after being allowed to reopen after a COVID-19 shutdown, barbershop and salon owners and workers say they are still facing struggles.

Now, they are hoping the state will again loosen restrictions to allow more business.

Nearly two months after being allowed to reopen after a COVID-19 shutdown, barbershop and salon owners and workers say they are still facing struggles.

"I am finding that I need to watch every single dollar a little more than I probably was thinking I would be at this stage in the game," explained Paul Felipe.

After more than thirty years of doing hair, Felipe is being forced to cut back as state mandates only allow him to see half the clients he saw before COVID.

Since re-opening June 1, salons are only allowed to operate at 50 percent capacity -- a measure that Felipe and others say is not equitable.

"They’re doing this capacity by fire code so that takes all your square footage into account," said salon owner Erin Zosel. "We can have the same styling area as another salon that has a giant front room area and they can be working technically at 100 percent capacity...their 50 percent is 100 percent.”

Zosel, the owner of Sloane’s Beauty Bar in Edina, says they could increase capacity and still socially distance, allowing her stylists to pick up the hours they so desperately want and need.

"We are being so safe and it is such a sanitary environment that we should be able to give these services and make a living safely," she argued.

The issue has caught the attention of State Representative Heather Edelson who has heard from plenty of stylists who say, to make up for lost wages, they’re doing home visits where safety and sanitation can’t be controlled.

In one case that she knows of, it resulted in the stylist getting COVID-19.

“We have to make sure we’re protecting the public in ways that go beyond capacity restrictions,” said Edelson. “They’re doing house calls not because they’re bad people, but because they have bills to pay.”

Edelson cited a case study by the Centers for Disease Control in which two stylists in Missouri had contact with 139 clients before finding out they were positive for COVID-19. None of those clients tested positive, with the CDC citing strict mask wearing as the reason.

“I think now with that mask mandate, we need to start forward-thinking and see where does that take us with businesses,” she said.

Felipe says if the last eight weeks proved anything, it is that they can do this safely.

"If we have that ability to open up a little more, to get that flexibility or get that okay from the governor, we don’t need to risk those situations happening outside the salon," he said.