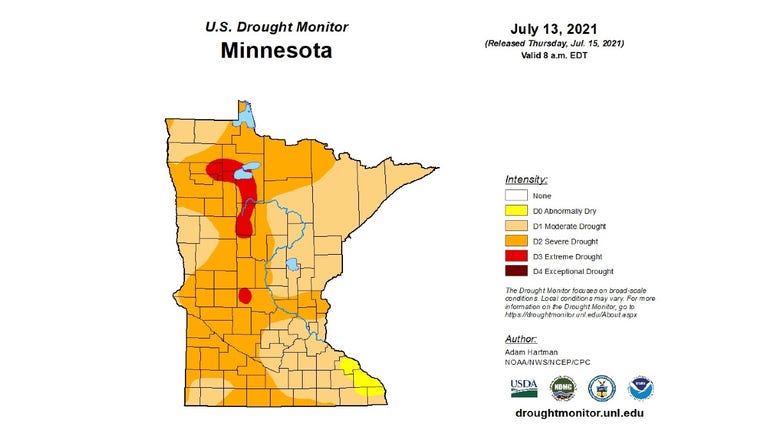 The Minnesota Drought Monitor released on July 15, 2021. About 52% of the state is experiencing severe drought.

ST. PAUL, Minn. (FOX 9) - With 52% of Minnesota experiencing a severe drought, the state is now in the ‘drought warning phase’ of the statewide drought plan, according to the Minnesota Department of Natural Resources.

The DNR also expects stream flows in the Twin Cities Metropolitan Area to drop below-designated levels in the coming days - another factor that triggers the drought warning phase.

Entering this phase puts several steps into action, including the convening of the State Drought Task Force, which last gathered in 2012. Water appropriators with DNR permits will be notified to follow water conservation measures as will public water suppliers. Residents will likely soon receive information about reducing water use or restrictions.

According to the DNR, Minnesota would need three to five inches of rain over a period of two weeks for significant drought relief. Multiple rainfall events rather than a single heavy rainfall would be better for the soil.