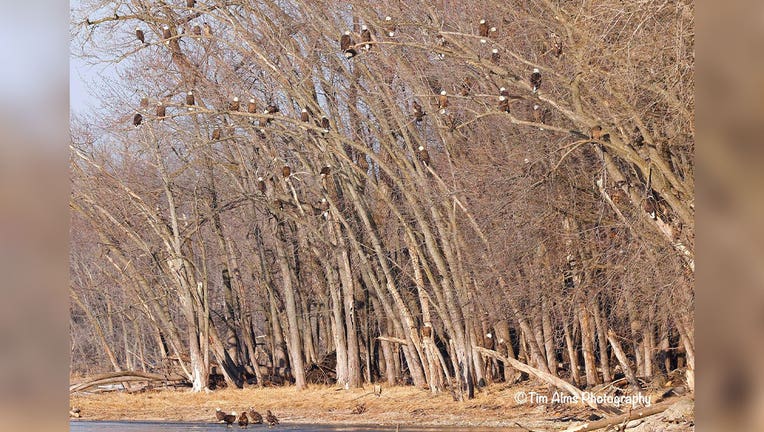 "The number of them sitting in one tree, I think a lot of people had never seen that before," Alms said.

A photo captured by Tim Alms, that’s now gone viral on social media, shows of dozens of eagles perched near Red Wing, Minnesota, a common sight in the Mississippi River Valley during the winter months.

Photographers and bird watchers flock to Covill Park in Red Wing every year to see the dozes of eagles that perch and hunt there. The nearby power plant dumps recycled water into the Mississippi River, keeping the water warm enough that it doesn’t freeze over in the winter. That open water attracts eagles from northern Minnesota and Wisconsin in search of a food source in the winter.

"The only reason they’re gathering together is because it’s like going to the good buffet in town," said Ed Hahn from the National Eagle Center in nearby Wabasha.

Hahn says the eagles will not be gathered along the Mississippi valley for long, once the weather starts warming up and spring hits they start flying back north to nest. He says over the next few weeks most of the eagles in the area will be gone and won’t return until next winter.

"We are at the very last hurrah of the season," Hahan said.

Hahn says seeing eagles in such large numbers is something relatively new in North America. For a time, eagles were on the endangered species list.

"That’s really the legacy of the bald eagle right now is that yes, we came very close to losing it, but we didn’t. Today they’re thriving and we need to apply those lessons to other animals that need our help," Hahan said. "The bald eagle is the biggest success story we have as far as wildlife conservation certainly in North America."

Hahn says if you miss out on the eagles perching in the Mississippi River Valley this spring, the best time to return to look for them is late December through early March.

Hahn and the team at the National Eagle Center will be at the Mall of America on Tuesday, March 15 with their "eagle ambassadors" educating visitors about eagles. For more information click here.